Home ›
Our Pet Experts ›
Linda Lombardi ›
Penguins: What You Need to Know About These Flightless Fowls

Penguins: What You Need to Know About These Flightless Fowls 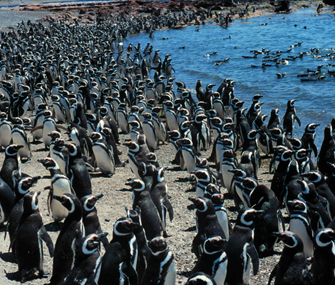 Photo courtesy of the University of Washington
Magellanic penguins bathe and socialize on the beaches.

Happy World Penguin Day! And who doesn't love penguins? With their comic upright waddle and adorable tuxedo patterning, they seem almost human. But penguins are more than just cute — they are an interesting and important part of our ecosystem. To find out more about these flightless fowls, we talked to Dee Boersma and Ginger Rebstock from the University of Washington's Center for Penguins as Ocean Sentinels, which has been studying the largest colony of Magellanic penguins in the world at Punta Tombo, Argentina, since 1982.

"The most surprising thing for people is that I don't work in Antarctica," Rebstock says. "Where I live in Seattle is farther from the equator than my study site is."

Many of the places where penguins come ashore to breed are hot, dry desert areas in South America, South Africa and Australia. In fact, Galapagos penguins breed right on the equator. Cold is important to penguins in the water, but not on land. "The thing all of these places have in common is cold water," Rebstock says. That's because cold water contains more fish than hot water does, and penguins need a lot of food that's close enough to swim to. 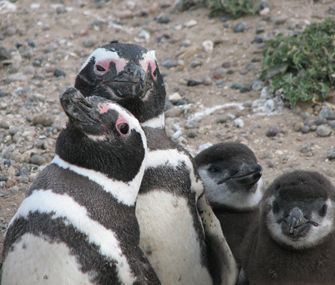 Photo courtesy of the University of Washington
This mother and father penguin pair prove to be excellent parents as they trade off chick guarding and feeding duties seamlessly.

What type of animal is a penguin? If you said a bird, you are correct. But not everyone knows that. "A fair number of people don't realize that penguins are, in fact, birds," Rebstock says.

The uncertainty is understandable because penguins are unusual birds. They don't have hollow bones like many other birds, for example, because they basically fly through the water instead of the air. "Water is such a thick medium, they can have solid bones — they don't have to be light in the water," Boersma says.

Their feathers are very different from those of other birds as well. Each feather is double, with an outer layer and a down feather underneath. According to Boersma, a penguin "has its own down sleeping bag with a covering — a waterproof layer that keeps the down dry."

Penguins can also hold their breath for a long time and dive incredibly deep, behavior that's more like marine mammals than birds. Emperor penguins, for example, can dive to over 500 meters. Penguins also live longer than most other birds; some of the penguins Boersma and Rebstock study are over 30 years old.