March 7, 2017: We've scoured the Web to find the best and most compelling animal stories, videos and photos. And it's all right here. 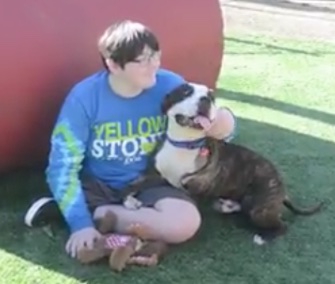 Two years ago, Quinn Scharn lost his leg and hip to bone cancer. When he woke up from surgery, he had decided on one thing: he wanted a dog who had three legs. After a two year search, his mom, Teresa Howell, spotted the perfect companion for her son on the Front Street Animal Shelter’s Facebook page. She picked Scharn, who’s now 12 and cancer free, up early from school and drove to the Sacramento shelter. When they got there, they found out that Logan was on hold for another family. But after visiting with him, they learned that the family had just called and changed their mind — and Logan was available. The boy and dog had made a connection, and Scharn was thrilled to bring Logan home that day. A video of their sweet story posted on Facebook by the shelter on Thursday has already been viewed more than 1 million times. — Read it at People Pets

A 25-year-old sea turtle named Bank had life-saving surgery Monday to remove 11 pounds of coins that she’d eaten. Many Thais believe that throwing coins on turtles brings longevity, but it wasn’t good luck for Bank. The 915 coins that she’d consumed after they’d been thrown into her pool had cracked her shell, causing a life-threatening infection. It took five surgeons more than four hours to safely remove the coins while the turtle was under general anesthesia. “I felt angry that humans, whether or not they meant to do it or if they did it without thinking, had caused harm to this turtle,” said surgery team leader Nantarika Chansue. — Read it at Fox News

U.S. Air Force soldier Kyle Smith took his beloved retired military working dog, Bodza, to the veterinarian last week because the 11-year-old German Shepherd was struggling to walk. When he was told the dog was suffering from an incurable disease that affected his spinal cord, he knew he had to say goodbye. He tried to hide his heartbreak from his superiors, but they arrived at the clinic out of respect for Smith and Bodza — and his boss asked for an American flag to be placed over the dog’s body in recognition of his service. “I’ve never cried that much my entire life,” Smith said of the experience. “All of us have that dog that is so special to us … he was the nicest dog in the world.” — Read it from Inside Edition via Yahoo 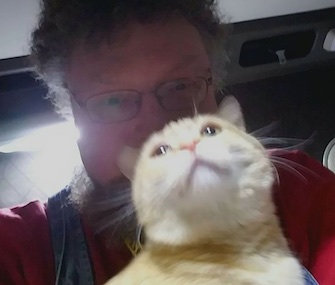 Truck driver Paul Robertson spends his long days and nights on the road with Percy, his beloved orange tabby cat. But when he was asleep at a rest area in Ohio last month, the cat stepped on a window power switch in the cab and escaped. Robertson turned to social media for help, and he and his friends spent 24 hours scouring the area. He was devastated when he had to leave without his pal to make his delivery on time, posting on Facebook, “I feel like the worst cat dad ever.” So, when he arrived at his destination 400 miles away, he was shocked to see his Percy crawl out from under his semi-truck. “If ever a moment felt like a gift from God, it was then,” he said. He brought his cat to a local vet and learned that the only thing he was suffering from was an eye infection, likely from the dust and salt he endured during the trip. Percy is now back in his copilot spot — and Robertson has rigged the window switches so he can’t accidentally use them again. — Read it at the Minneapolis Star Tribune

Ivan the Special Needs Cat Gets a Home

There’s happy news for a special cat we told you about last week. After being overlooked for weeks at the MSPCA shelter in Boston, a 10-month-old kitten named Ivan who gets around using an “army crawl” had a change in fate. Once his story made headlines, the shelter got more than 2,000 adoption inquiries from 40 states and several countries around the world. The staff has chosen one lucky family for Ivan, and he’ll leave for his new home on Wednesday. Ivan also brought good luck for his fellow shelter cats — all of the kitties in the MSCPA’s adoption room found homes on Saturday, including two 15-year-old cats. — Read it at Boston’s WCVB