Feb. 9, 2016: We've scoured the Web to find the best and most compelling animal stories, videos and photos. And it's all right here. 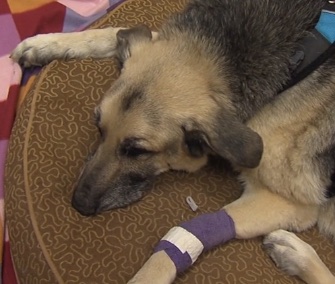 CNN
Maverick, a 12-year-old German Shepherd, survives being trapped in a sinkhole.

A 12-year-old arthritic German Shepherd is back home after his owner found him buried alive in a sinkhole he’d fallen into. Maverick slipped away from his Missouri home on Feb. 4, despite the invisible fence that surrounds it. His panicked family started searching for their senior dog, even asking authorities to check local ponds to make sure he hadn’t fallen through the ice. Three days later, Lisa Van Valkenburgh was walking on a road when she heard a faint howl coming from the ground. Amazingly, she’d found Maverick, clinging to life in a sinkhole. Fearing the hole would collapse, Van Valkenburgh called for help. It took firefighters nearly two hours to dig Maverick out and “release the suction the clay had on him," she said. He was stabilized by his veterinarian, who washed all the clay from his eyes and nose and treated him for severe dehydration. "It still for the life of me shocks me that I found him,” Van Valkenburgh said. — Watch it at CNN

Have you ever wondered how your dog’s intelligence measures up to his peers? Researchers from the London School of Economics and University of Edinburgh have come up with a test to measure canine IQ. In a “purpose-built barn,” they measured navigation ability, speed and skills in following a pointed arm. In one exercise, 68 Border Collies had to find their way to a food reward that was behind a barrier. In another, they were offered two plates of food and timed to see how quickly they’d decide on the one with the larger portion. “Even within one breed of dog … there is a variability in test scores. A dog that is fast and accurate at one task has a propensity to be fast and accurate at another,” the researchers said. — Read it at Discovery News

Two dogs who live in the Flint, Michigan, area have tested positive for lead toxicity, prompting officials to remind residents that their pets need to drink filtered or bottled water, too. Flint is the site of a water crisis, with children suffering from lead in the area’s water. The dogs are the first two to be confirmed with lead toxicity in the state in five years, and both have occurred in the last six months. One of the affected dogs was a stray and the other was a pet. Both dogs are alive, but the state report doesn’t specify how high their lead levels were, or what symptoms they had, said state veterinarian Dr. James Averill. — Read it at Yahoo Health 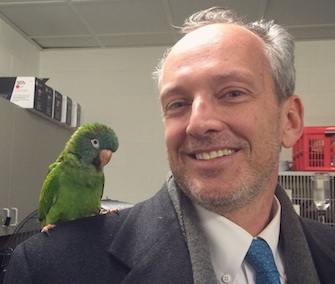 We often share the happy reunion stories we see, but this one is special — because the pet is a little green parrot. After the bird arrived at the Fairfax County, Virginia, Animal Shelter, adoption counselor Lauren did a lot of research to track down his owner, based on the few clues she had. It turns out that Azzurro had been missing since April, and he was reunited with his owner on Monday. “When his dad came to pick him up, Azzurro recognized him right away,” the shelter wrote in a Facebook post. “He perched on his shoulder, happily stretching his wings, bobbing his head, and preening contentedly. Hooray Azzurro!” — Read it from Fairfax County, Virginia, Animal Shelter via Facebook

U.K. Station Cat Gets a Promotion

Felix has been working at the Huddersfield train station in West Yorkshire, England, since she was a kitten. Now, her hard work catching mice and greeting customers has paid off. Last week, the Transpennine Express rail line promoted Felix, giving her the title of official pest control manager — complete with a vest and a nametag. The attention has resulted in nearly 20,000 fans on her Facebook page. “Well, the fame hasn’t quite gone to her head,” said one of Felix’s coworkers, who looks after her. “As with most cats, they already think the world revolves around them. She’s getting more treats and more attention, so all in all she’s very happy.” — See photos at Buzzfeed