Jan. 4, 2017: We've scoured the Web to find the best and most compelling animal stories, videos and photos. And it's all right here. 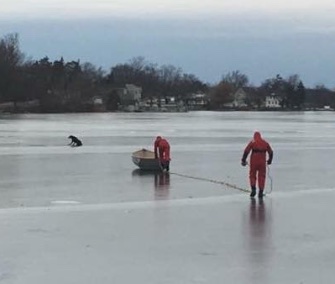 Oscar got off his leash on New Year’s Eve and trotted out onto icy Lake Orion in Michigan. But the 14-year-old black Labrador Retriever suffers from weakness in his hind legs, so once he got about 250 feet out and hit a slippery patch, he fell down and couldn’t get back up. His owners did the right thing and called the Orion Township Fire Department for help. Two firefighters put on their cold water rescue suits just in case the ice gave way, but luckily it didn’t. They were able to walk out on the ice and retrieve Oscar without incident. The pooch was back home, warm and toasty, in time to ring in the New Year. — Read it at People Pets

An orca known as Granny who was estimated to be more than 100 years old and the world’s oldest known killer whale hasn’t been seen in several months, and is now presumed dead. Granny was last observed by the Whale Research Center in October. The group announced the death “with heavy hearts” in a statement shared on Facebook. Granny was considered the leader of the J2 pod, a group of 24 orcas living in the northwest Pacific Ocean, off southern British Columbia and Washington State. — Read it at Seeker

Animal Planet’s 13th annual Puppy Bowl will include 78 puppies from 34 rescue organizations in 22 states. The scampering contestants are always adorable, and this year a few of them are extra-inspiring, too. The roster includes Doobert, who’s deaf, Winston, whose sight and hearing are impaired, and Lucky, whose right front leg had to be amputated after an injury. The canine alternative to the Super Bowl will air on Animal Planet on Sun., Feb. 5 at 2 p.m. E.T./P.T. — Read it at USA Today 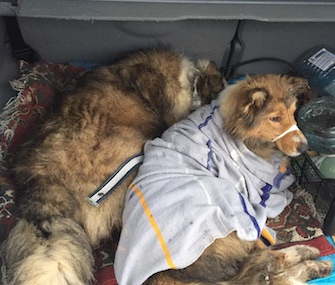 Денис Малафеев / Facebook
An injured dog and her loyal friend were rescued from train tracks in Ukraine.

An incredible video shot on Christmas in Ukraine shows a brave dog risking his own life to save that of his friend, who was lying injured in the middle of train tracks. He placed his body on top of his hurt friend, covering her as a train safely passed over them. The dog refused to leave his friend’s side as people came to rescue them. The dogs were brought to get help and were adopted less than a week later. Their new owner has named them Panda and Lucy. — Read it at the New York Post

During a three-day rescue operation, a baby orangutan who’s less than 4 months old was saved in Indonesia. Another mother and baby and a juvenile were also recovered, but rescuers are sure that little Paijo was alone. “We are not sure exactly what happened to Paijo's mother, but we can be certain that this tiny ape is an orphan. A mother orangutan would never willingly abandon her baby,” the International Animal Rescue wrote in a Facebook post on Tuesday. Paijo is now getting treatment and being bottle fed at their center in West Borneo. The little guy will soon join other orphans in the rescue’s orangutan baby school. — See photos at International Animal Rescue’s Facebook