Dec. 2, 2016: We've scoured the Web to find the best and most compelling animal stories, videos and photos. And it's all right here. 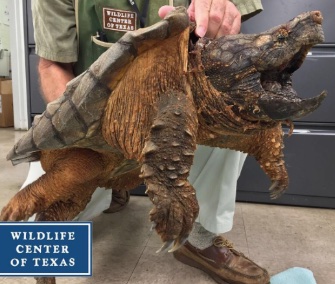 Wildlife Center of Texas
An alligator snapping turtle was rescued from a drainage pipe in Texas.

Fire rescue crews in Hockley, Texas, freed a prehistoric-looking alligator snapping turtle from a drainage pipe on Tuesday. A resident noticed the 53-pound animal wedged in the end of a pipe in the development outside Houston and called to report it. Crews found the pipe had a dent at its opening that was preventing the turtle from passing through, and the turtle was struggling to keep its head up as water rushed over it. Rescuers used a pipe spreader to free the turtle, and a veterinarian with the Houston SPCA helped him out. Unfortunately, there were other snapping turtles in the pipe who didn’t survive. The surviving turtle was taken by animal rescue ambulance to the Wildlife Center of Texas, where it will be rehabilitated with the hope of releasing it back into the wild. — Read it from the AP via Yahoo

There’s a happy ending for a dog who was lost while traveling with the Mexican airline Interjet. The airline found the 8-year-old dog named Mika after she’d escaped her cage and disappeared at the international airport in Mexico City. Interjet had helped in the search for Mika, posting photos of flyers and the search effort. On Wednesday, the airline Tweeted photos of Mika being reunited with her owner, Pamela Alvarez of Houston. Alvarez used Twitter to thank friends, family and Interjet for helping to find her dog, but no details about where she was found were available. — Read it at CBS News

Four critically endangered black-and-white ruffed lemur babies were born in late October to first-time parents Polo and Masina at the National Zoo and Aquarium Canberra in Australia. Keepers say the quadruplets are happy and healthy and bonding well with their parents. Large litters are typical of the species, which is the more endangered of the two species of ruffed lemurs. — See photos at Zooborns 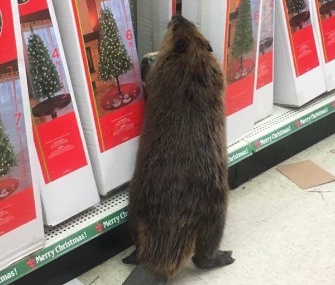 St. Mary's County Sheriff / Facebook
A beaver checked out Christmas trees before pulling items off shelves at a dollar store.

A wayward beaver arrived at a Maryland dollar store on Monday and headed right for the store’s holiday decorations, where it was photographed checking out the artificial Christmas trees. When he started pulling things off the shelves, the employees called the St. Mary’s County Sheriff’s Office for help. “The suspect attempted to flee the area but was apprehended by Animal Control,” the department posted on Facebook with photos of the incident. “All joking aside … Animal control responded, safely captured the beaver, and released him/her to a wildlife rehabilitator.” — See photos at Cleveland’s Fox 8

A couple in Florida made their loving kittens the stars of their holiday card, and the photos of the two nuzzling by the Christmas tree have gone viral. James Cochran and Lauren Sedner adopted the kittens five months ago, when they were 10 weeks old. The orange kitty, a male, is named Louie, and his gray friend is a female, Luna. The duo quickly became inseparable, and Cochran has been sharing photos of them snuggling for months. We suspect he may have a few more followers now! — See photos at the Huffington Post