Jan. 20, 2015: We've scoured the Web to find the best and most compelling animal stories, videos and photos. And it's all right here. 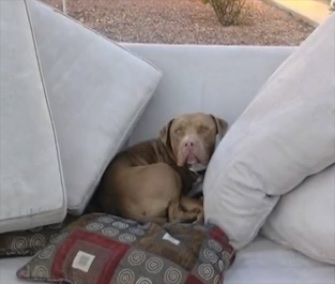 ABC 15 Arizona
There's been an outpouring of help for a dog who was left behind in Phoenix when his owner moved.

A picture of a 3-year-old Pit Bull curled up on an abandoned couch in Phoenix caught the attention of social media — and led to lots of potential adopters for the dog. The woman who took the photo says her neighbor moved Wednesday, and she spotted the dog on the couch when she got home from work Thursday. The people who moved into the home said the dog wasn’t theirs, and he’d been there all day. "I guess the old owners had left him there," said the neighbor, who declined to give her name. She contacted Maricopa County Animal Control, who came out to get the dog that night. "When I saw it, I almost cried. It's this picture of this dog and he looks so pitiful and tiny," said animal control’s Melissa Gable. "We've been inundated with calls, people, rescue groups, people that want to step up and help.” Animal control has relayed information about the dog to Phoenix police, and the pooch is now in the care of the Arizona Humane Society. Gable told AZFamily she wanted to let the public know he’s OK. — Read it at ABC 15 Arizona

Mexico is testing unmanned drones to help it save the critically endangered vaquita marina, which is the world's smallest porpoise. The porpoise is threatened by illegal fishing in the upper Sea of Cortez. The country’s environmental protection agency says it hopes to have three drones patrolling the animal’s habitat in the coming months. “Drones would allow us to have permanent aerial patrols in the area and be able to react much more efficiently and quickly," said Alejandro del Mazo, an assistant prosecutor with the agency. The sea is the only place where the elusive porpoises are found, and there are fewer than 100 of them remaining. — Read it from AP via Yahoo


Study: Chimps Yell to Each Other About Favorite Fruits

Researchers say they’ve observed wild chimpanzees calling out to each other about where their favorite fruits can be found. The study is the first to find that chimps communicate information about the tree size and the amount of available fruit as well as the quality of the fruit. “At the very least, research shows that chimpanzees use vocalizations in a sophisticated manner, taking into account their social and environmental surroundings," said project leader Ammie Kalan of the Max Planck Institute for Evolutionary Anthropology. By observing chimps in the Ivory Coast’s Taï Forest for more than 750 hours, the researchers discovered that higher pitched calls were produced when the chimps found fruits from Nauclea trees. They made even higher pitched calls when they found smaller trees and called with a lower pitch for bigger trees with more fruit. The study was published in the journal Animal Behaviour. — Read it at Discovery News 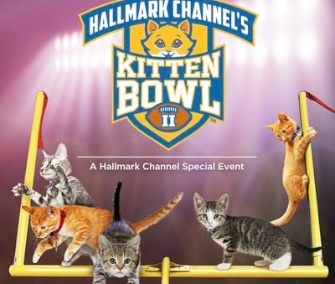 Hallmark Channel
The lineup for the second annual Kitten Bowl is revealed.

Now that we know the New England Patriots and Seattle Seahawks will face off in the Super Bowl Feb. 1, we can move on to other important matters — like the adorable kittens who’ll face off in the Kitten Bowl that day. The Hallmark Channel has announced the feisty feline lineup for its second annual Kitten Bowl, which premieres Feb. 1 at 12 p.m. ET. The game will be hosted by North Shore Animal League America spokesperson Beth Stern, who is radio personality Howard Stern’s wife. Last Hope Animal Rescue and Rehabilitation is providing more than 90 kittens for the game, and all of them will head home to adopted families right after their Feline Football League debut. They’ll compete in obstacle courses set up with yarn balls, toys on string and lasers. ­— Meet the stars at USA Today

JoeAnn Navarro of Galveston, Texas, was thrilled to get a call Wednesday saying her 1-year-old Pit Bull, Blue, had been found — 1,100 miles away. "I just started bawling," Navarro said. "I can't comprehend how she got in Indiana." Blue and Navarro’s other dog disappeared from her backyard in May. Someone dropped Blue off at the Kokomo Humane Society in Indiana, and the staff was able to locate Navarro using Blue’s microchip. Unfortunately, the second dog hasn’t yet been found. Navarro, 69, said she couldn’t afford to make the 34-hour round trip to pick up Blue, but luckily, a volunteer with the Galveston Island Humane Society has offered to do it for her. The volunteer will leave Friday to pick up Blue and bring her back home. "I'm just so happy, so happy to get her back," Navarro said. — Watch it at Houston’s ABC 13