Dec. 21, 2015: We've scoured the Web to find the best and most compelling animal stories, videos and photos. And it's all right here. 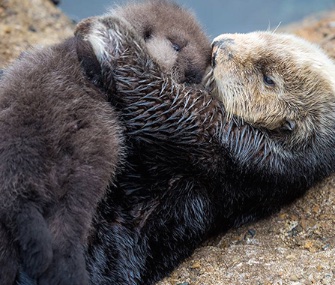 Photos of a charming new baby otter drifting around the Great Tide Pool at the Monterey Bay Aquarium in California are making waves. The pup was born to a wild sea otter who had been using the protected basin to rest from winter storms in the area. The newborn pup was spotted Sunday morning, resting on its mom’s belly and “being furiously groomed by a proud momma,” the aquarium wrote in a blog post. Visitors and the aquarium’s staff watched as the infant became more and more fluffy and adorable as mom licked it clean. The wild otter family may leave the comfort of the tide pool at any time, but for now, they’re enjoying the relaxation. — See more photos from the Monterey Bay Aquarium via Tumblr

At 7 years old, Joe had a first-of-its-kind heart operation at Auburn University’s College of Veterinary Medicine. The Bulldog from Mississippi is the first dog at AU to receive and thrive on the most advanced pacemaker available to humans. In the past, pacemakers for dogs were older models that only regulate the bottom chamber of the heart. Newer pacemakers regulate both the top and bottom chambers. Joe’s family is hoping the device will extend his life by two years. — Read it at Alabama’s WTVM

Scientists at the University of Veterinary Medicine, Vienna, have found dogs exhibit prosocial behavior with dogs they know. Prosocial behavior, or helping others without any direct personal benefit, has until now been seen in animals closely related to humans. In an experiment, dogs were given the ability to pull trays that were empty or had a treat on them for their partner dog. They found that the dogs were more likely to pull a tray with a treat on it for a dog they were familiar with than one with whom they weren’t familiar. The study was published in the journal Scientific Reports. — Read it at Science Daily 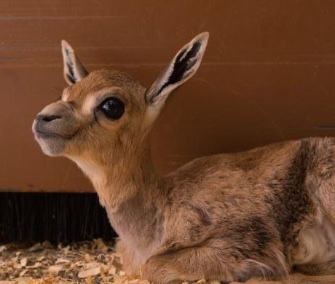 Oregon Zoo
An endangered Speke's gazelle survived thanks to quick action by her keepers at the Oregon Zoo.

Keepers Rally to Save Rare Gazelle

The animal care team at the Oregon Zoo jumped into action last month to rescue an endangered newborn Speke's gazelle from her inattentive mom. Now 1 month old, the calf is on the road to recovery. When the calf was found cold to the touch the morning after her birth, she was sent to intensive care at the zoo’s veterinary medical center. "The rest of the day involved some heroic efforts on the part of our vet staff," said zoo curator Amy Cutting. Juliet is being slowly reintroduced to her first-time mom, Pansy, but she’s still being bottle fed five times a day and is closely monitored by her keepers. — Read it at the Oregon Zoo

Al and Nadia Kadri were thrilled to be reunited with the cat they feared they’d never see again, months after they arrived in Germany. The couple brought their kitten, Zaytouna, from Syria to Greece with them in a life raft. But once they reached a refugee camp in Germany, the cat was detained and quarantined. A government worker told them they may not get the cat back. But earlier this month, that same worker arrived at the couple’s temporary home with Zaytouna. The official said members of the holding facility where Zaytouna was staying had fallen in love with the tabby. “I haven’t felt this happy in a long time,” said Al Kadri of their reunion with the cat. — Read it at the U.K.’s Daily Mail