June 16, 2015: We've scoured the Web to find the best and most compelling animal stories, videos and photos. And it's all right here. 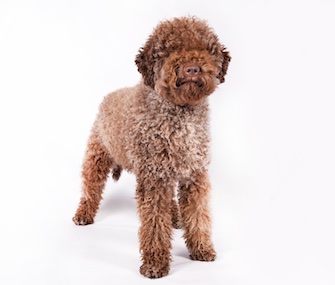 The American Kennel Club said Monday it would add three more dog breeds to its pack: the Berger Picard, Lagotto Romagnolo and the Miniature American Shepherd, bringing its total number of breeds to 187. The medium-sized Berger Picard from France will be a member of the herding group. The athletic breed needs lots of exercise and mental stimulation and is good-natured and loyal. The Lagotto Romagnolo, pictured, is originally from Italy and will be a member of the sporting group. It’s the only purebred dog breed to be recognized as a specialized truffle searcher. The Lagotto Romagnolo is high-energy, affectionate and good with children. The Miniature American Shepherd also joins the herding group. Like the other two breeds, it’s athletic and energetic. It’s also intelligent and eager to please. "What they have in common is that they all make great family pets, and the key is to find the traits and characteristics within a breed that work best with your lifestyle," AKC spokeswoman Gina DiNardo said of its new members. To be recognized by the AKC, there must be several hundred dogs of the breed registered across the country. — Read it and see photos from the AP via Yahoo

Study: Early Bird Gets the Mate

Researchers from North Dakota State University gave some male songbirds melatonin, the hormone that affects your body clock. That made them sleep later than other males — and they didn’t only miss the worm by sleeping in. Paternity tests showed that males who sleep later were eventually taking care of chicks who were fathered by other males who were awake earlier. “This study suggests that being active during this pre-dawn period may be important for not only gaining reproductive success through extra-pair mating attempts, but may also be important for copulating with your mate. If you are not around when she becomes active, she may seek opportunities from neighboring males,” said study lead author Timothy Greives. The study was published in the journal Functional Ecology. — Read it at Discovery News


Jellyfish Can Quickly Put Itself Back Together, Study Finds

A new study by biologists at the California Institute of Technology finds that when a juvenile moon jellyfish loses tentacles, it quickly reorganizes its remaining limbs to maintain symmetry. The process was found to begin 12 hours to four days after the jellyfish lost a tentacle. Researchers theorized that symmetry was important for the moon jellies to swim and feed. The study was published in the journal Proceedings of the National Academy of Sciences. — Read it at The New York Times 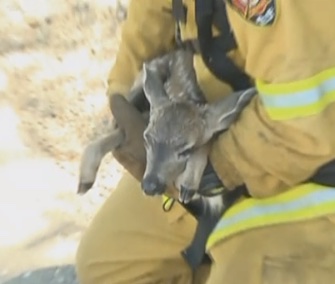 ABC News
El Dorado Hills, California, firefighters rescued a 2-week-old fawn who was caught on a fence while trying to escape from a grass fire.

A 2-week-old fawn has been named Smokey after firefighters saved him from a vegetation fire in California Friday. “One of our firefighters noticed the little guy stuck in some wire fencing,” said El Dorado Hills fire chief Dave Roberts. “We’re guessing he tried to jump the fence to follow his mother.” The crew tried to cool the weak and tired fawn with some water. Smokey is recovering from smoke inhalation and a swollen foot in the care of the Sierra Wildlife Rescue. “If he were to recover exceptionally quickly within the next couple of days, there’s a possibility of taking him back where he was found and reuniting him with his mom,” the group’s Dave Cook told Sacramento’s KXTV. If Smokey’s mom can’t be found, he’ll stay with the rescue until he’s 4 or 5 months old and will then be released into the wild. — Read it at ABC News

When thieves broke into Ally Munro’s home in Melbourne, Australia, 12 days ago, they stole two laptops, an iPad — and her adorable 4-month-old Schnoodle, Ted. The police helped Munro search for Ted, and the owner started a social media campaign with the hashtag #HelpFindTed. Over the weekend, Munro came home to a much happier scene: Ted was safe and sound in the backyard. Munro isn’t sure how he got there, but she’s thrilled her playful puppy is back. “Look who’s home!! Thank you to everyone who helped in the search for Ted, you are all amazing!!!!” she posted on Facebook with a photo of the puppy. — Read it at Buzzfeed