January 16, 2012: We've scoured the Web to find the best and most compelling animal stories, videos and photos. And it's all right here. 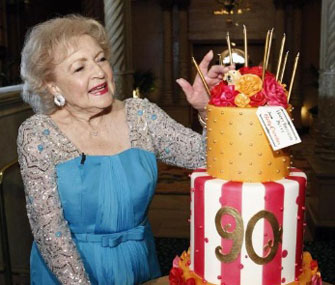 Trae Patton/NBC
Golden girl Betty White celebrates the big 9-0 with a cake topped with a likeness of her dog, Pontiac.

Betty White Marks Her 90th Birthday at a Big Bash

Half a dozen men serenaded actress and animal lover Betty White at her 90th birthday celebration, singing “entertaining’s not where it ends, Betty. You seek help for our four-legged friends, Betty.” The cake featured a white chocolate figurine of her Golden Retriever, Pontiac, and attendees received a copy of White's new book, My Life at the Zoo. The star’s celebration airs tonight on NBC. — See the clip at the Huffington Post

Knut, the beloved 4-year-old polar bear who died at the Berlin Zoo last year, will be honored with a lasting tribute. The zoo, along with an association of supporters, selected the design for a bronze likeness of the bear, “Knut – The Dreamer,” which features him resting on his paws. — Read it at The New York Times 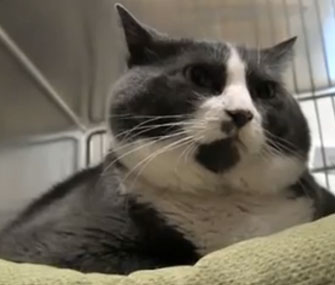 Oregon Live
Walter is one fat feline, clocking in at 28 pounds.

You'd assume that veterinarians would want Walter, a feline who weighed in at 28 pounds when he arrived at an Oregon shelter, to go on a strict diet. But vets instructed Walter’s new owners to let him eat whatever he wants for the first two weeks, so he can adjust to his new home. However, next month, he's going on a low-calorie diet. — Read it at Oregon Live

Plus: Read why Dr. Marty Becker and his fellow vets don't think fat cats are funny

It’s been a big week for pop star Beyoncé. Not only is she a new mother, but she also has a horse fly named in her honor. — Read it at Science Daily

At a zoo in Berlin, all those extra holiday trees made for a tasty — and apparently healthy — snack for the elephants. – See the photos at Today