Nov. 1, 2012: We've scoured the Web to find the best and most compelling animal stories, videos and photos. And it's all right here. 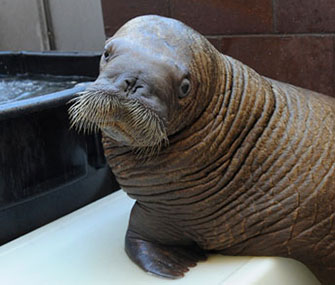 Among the victims of Hurricane Sandy are the New York Aquarium on Coney Island and Jenkinson’s Aquarium in Point Pleasant Beach, N.J., which were so badly flooded that they will be closed indefinitely. The New York Aquarium’s residents — including the famed orphaned baby walrus Mitik, who arrived at the facility from Alaska less than two weeks ago — may need to be moved to temporary locations, said Jim Breheny, executive vice president of zoos and aquarium for the Wildlife Conservation Society, in a statement late Wednesday.

The entire 14-acre facility was left underwater by a surge of floodwaters. The staff members who road out the storm at the aquarium have established temporary life-support systems for the animals, including Mitik, but “we have a short window of time to get ... systems re-established,” Breheny said. “If this cannot be accomplished in this critical period, we will temporarily relocate the collection to other ... aquariums in the region.” Meanwhile, the New Jersey facility is relying on backup generators, but need to get their permanent systems back up and running in order to keep the animals there. — Read it at Today

Beavers Swept Out of Damns

Wild animals are also trying to cope in the aftermath of the hurricane. The Animal Welfare League of Arlington, Va., had two reports on Wednesday of confused beavers found wandering around residential neighborhoods. They believe the beavers were temporarily flooded out of their homes in the storm. “They were inconvenienced, like the rest of us,” said Arlington County Naturalist Greg Zell. “Now that the storm is gone, they’ll go back to their homes and refurbish them.” One of the beavers walked off on its own, and the other was captured by animal control and released in a safer area after it was determined to be in good condition. — See photo at NBC Washington 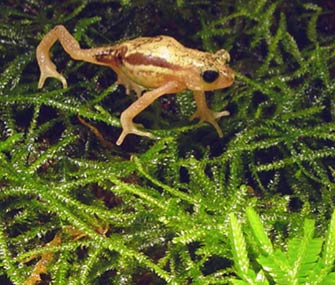 Declared extinct in the wild three years ago, 2,500 thumbnail-sized Kihansi Spray Toads who were bred in captivity were reintroduced to their native habitat — a section of waterfall spray in the Udzungwa Mountains in Tanzania — this week. "This represents the first reintroduction of an amphibian species that has been declared Extinct in the Wild by the IUCN," Ana Denman of Global Wildlife Conservation told Discovery News. The success story was thanks to the collaborative work of conservation groups and the Tanzanian government, the GWC said.— Read it and see photos at Discovery News

Animals Can Fine-Tune Their Sniffing

Researchers at the University of Chicago have found that animals have the ability to focus their sense of smell, similar to the way humans can focus their eyes. By studying rats, the team discovered that the animals could adjust their sense of smell through sniffing techniques that bring scents to receptors in different parts of the nose. The sniffing patterns changed according to what the rats were attempting to detect. This helps them to sniff out predators and find food, the scientists reported in the Journal of Neuroscience.— Read it at Science Daily

While storm victims on the East Coast are coping with Sandy, there's good news from an area that suffered the impact of another huge natural disaster a year and a half ago. In Joplin, Mo., on May 22, 2011, the Kent family lost their home and their cat, Simba, when it wandered off during the tornadoes that tore through the town. They searched neighborhoods and shelters for their pet, but had no luck finding the feline. Then, when showing a visiting relative their old neighborhood last weekend, they spotted Simba. “I called his name, and he came right over,” said Jan Kent. “I never thought we would have him back.” Although Simba had lost a lot of weight while he was missing, the Kents said it was clear someone had been feeding him. The kitty will join the Kents at their new home. — Read it at New York’s Niagara Gazette