May 2, 2012: We've scoured the Web to find the best and most compelling animal stories, videos and photos. And it's all right here. 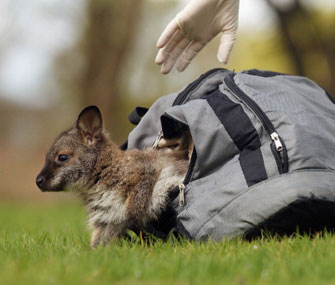 Getty Images
Tilly the wallaby hangs out in her new pouch.

Zookeepers in England created a substitute pouch using a backpack and a blanket for Tilly, an orphaned infant wallaby. Tilly's caretakers often feed and carry her in the makeshift pouch, where she'll stay until she’s more self-sufficient. — Read it and see more photos at Today

“The fastest land animal is neither the biggest nor the smallest, but something in between,” said the study's research leader. “Think about the size of an elephant, a mouse and a cheetah." The team found that the same principle also applies within and across species: When the scientists looked at monitor lizards, who vary substantially in size, the quickest lizards were the medium-sized members of the reptile species. — Read it at Science Daily

The Poison singer’s Petsmart line of 50 pet products includes a pleather vest and squeaky toys that don bandannas. “They all have the Bret Michaels signature touch,” said Michaels. — Read it at Today

After noticing that Shanthi, one of the National Zoo's Asian elephants, liked to make noise with objects, her keepers gave her some instruments, including a harmonica. "What's really amazing about the little ditties that Shanthi comes up with is they really do have a beginning, a middle and an end," said keeper Debbie Flinkman. "We all know there's going to be a crescendo, and we wait and then we applaud and then we go back to work. It's so enjoyable.” — Watch it through the National Zoo

Bo Obama is starring in an Internet ad for his owner’s re-election campaign, featuring the tagline “Join Pet Lovers for Obama.” Although political pets have long held a high profile, it’s unusual for one of them to appear in an official campaign ad. — Read it at the Washington Post