March 8, 2017: We've scoured the Web to find the best and most compelling animal stories, videos and photos. And it's all right here. 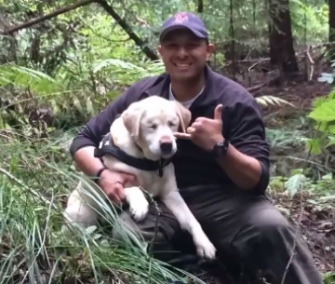 ABC 7 News
Sage, a 12-year-old blind Lab, was found in the mountains by her neighbor, Dan Estrada.

A 12-year-old blind yellow Labrador Retriever is back home recovering after spending seven long nights lost in the Santa Cruz Mountains in northern California. Sage’s heartbroken family and their friends had been searching for her since she wandered away from her Boulder Creek home on Feb. 24. The Lab had lost both of her eyes due to health problems. The Coles’ neighbor, firefighter Dan Estrada, had helped in the search and was keeping an eye out for her while he took an out-of-town friend for a hike in the woods on Saturday. “I look over and see Sage laying on the ground right with her head in the stream,” Estrada said. He was afraid it was too late — but then she lifted her head. “I jumped in the stream, I was super happy,” he said. “I put my arms around her and hugged her and threw her over my shoulders and carried her up the mountain.” He then brought Sage home to her ecstatic and grateful family. Estrada refused the $1,000 reward the Coles had offered for help finding Sage, so it will be donated to charity. — Read it at San Francisco’s ABC 7 News

Fritz, an adorable 4-month-old polar bear cub at Berlin’s Tierpark Zoo, had made international headlines and was seen as the next Knut, the polar bear who’d been abandoned by his mom and was hand-reared at the Berlin Zoo. But “stunned” zoo officials announced Tuesday that the cub who’d stolen their hearts had died from liver inflammation. The baby bear’s illness came on quickly. He was found lying next to his mom on Monday morning, and despite the team’s efforts to treat him with antibiotics and painkillers, he passed away that night. — Read it at Yahoo News

In much happier news, a North American river otter named Tilly is raising two tiny pups at the Oregon Zoo. The male and female weighed 4 ounces each when they were born on Feb. 26, and they’re already twice that thanks to their mom’s diligent care. “This will be the first time Tilly has raised more than one pup at a time,” said curator Amy Cutting. “It's exciting that they'll be growing up together and have the opportunity to play and wrestle with each other. Tilly's always been an extremely attentive mother, so it will be interesting to see what happens when her pups go in two different directions.” Tilly herself was taken in by the zoo when she was found orphaned and wounded in 2009. The pups haven’t yet been named, but they will likely be named after local rivers and waterways like the other otters at the zoo. — Read it from the Oregon Zoo and see photo on Facebook 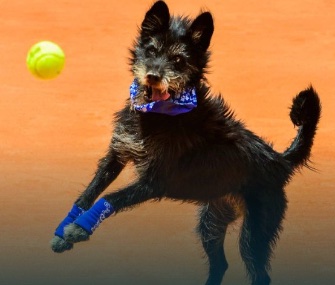 Six dogs from two animal shelters in San Paulo stole the spotlight at the Brazil Open as they raced around the tennis court as ball boys on Saturday. Cindy, Nanda, Blackie, Mia, Arlete and Ovelha joined in an exhibition match to help raise awareness for pet adoption. “It was pretty fun, super cool with the dogs, really nice experience,” said Brazilian tennis player Marcelo Demoliner — although he did mention they may need to “improve a bit” to serve in a real match. This is the second year adoptable dogs have taken part in the open. All of last year’s pups were adopted, and hopefully this year’s six stars will be, too. — Read it at the Huffington Post

Two brothers named Pablo and Picasso who were saved from a high-kill shelter in California have no idea how loved they’ve become. Photos of the pair, one with a twisted jaw and the other with a smile that could light up a room, have gone viral — and Luvable Dog Rescue is now considering thousands of adoption applications from people who want to give them a home together. In the meantime, they’re comfortable living in a cottage at the Oregon rescue with two other friendly pups. “I think they know that they're loved,” said the group’s executive director, Liesl Wilhardt. “And that's all that matters to them.” — Read it from Best Friends