April 5, 2012: We've scoured the Web to find the best and most compelling animal stories, videos and photos. And it's all right here. 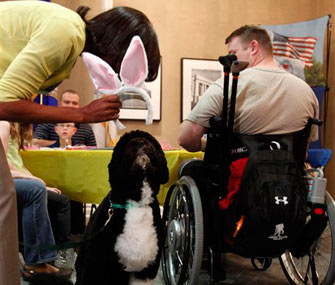 AP
Bo wasn't so sure about putting on those ears again, but he obliged.

The first dog looked skeptically at First Lady Michelle Obama when she tried to put those bunny ears on him again, this time for an Easter celebration at the Walter Reed National Medical Center in Maryland. (The Portuguese Water Dog last wore them in this adorable White House Easter egg roll lottery video.) "I brought one of my best friends in the whole world, my only son — I brought Bo," Obama told a laughing crowd. — Read it at USA Today

Plus: Bo isn't the only pet putting on his Easter best. — See more Easter photos at People Pets

Hero Dog Takes a Bullet for His Owner and Survives

Kilo, a 12-year-old Pit Bull, was shot when he tried to protect his owner during a home invasion in Staten Island, N.Y. The bullet ricocheted off the dog's skull and exited through his neck. “This is like, one in a million,” said Dr. Greg Panarello, who works at the veterinary clinic that operated on Kilo. Staff put an “S” for superhero on the dog’s bandage. — Read it at the NY Post

The Royal Antelope is the smallest — and likely the cutest — of the antelope species. A fawn born at Tampa’s Lowry Park Zoo in February is only about 6 inches tall — and will stand at only 10 to 12 inches tall when full grown. — See the photos at Zooborns 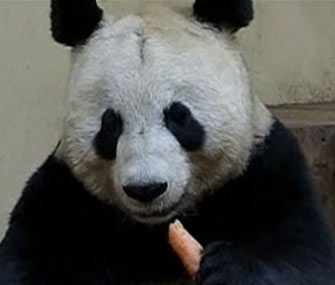 Sparks flew at the Edinburgh Zoo in Scotland when keepers opened a “love tunnel” between the enclosures where Tian Tian (Sweetie in Chinese) and Yang Guang (Sunshine) live. But zoo officials believe that the two are “relatively inexperienced,” so they may not have mated. Female pandas only have a 36-hour window to mate, so the pair will have to wait until next year to try again. Meanwhile, a new study found that reproductive seasonality exists in male pandas, too. — Watch it at MSNBC

When a Canadian hunter found a bear cub fighting for survival, he took him home, where he and his wife started bottle-feeding him. Conservation officials are warning the public that it’s illegal — and dangerous — to take in such wildlife, and they’re now working to find the cub a more appropriate home. — Watch it at CNN