May 16, 2012: We've scoured the Web to find the best and most compelling animal stories, videos and photos. And it's all right here. 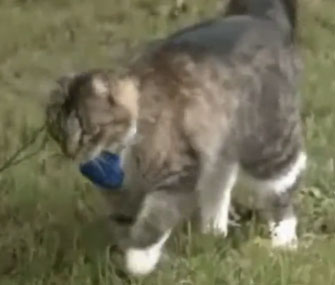 9News
Booker T, one of the cats in the study, runs outside with a camera attached to his collar.

Cat-Cams Capture What Felines Are Really Up To Outside

A University of Georgia researcher teamed up with National Geographic Remote Imaging to equip pet cats with tiny cameras to record their outdoor adventures. The footage revealed that they stalk chickens, climb roofs, explore storm drains and have dangerous encounters with woodland creatures. One cat even has a second family whose home he visits. Researcher Kerri Anne Loyd said that the point of her research was to show cat owners what their pals really do outside, and illustrate that indoor cats lead less risky lives. — Watch it at 9News

Will It Be Splitsville Soon for the National Zoo’s Giant Panda Pair?

If a recent attempt at artificial insemination for Mei Xiang and Tian Tian fails, the National Zoo may negotiate with China for one or two replacement pandas. A Smithsonian geneticist has already analyzed the best potential mates for both of the giant pandas. — Read it at the Washington Post

Plus: For 13 Magellanic penguins at the Aquarium of the Pacific, mating doesn’t seem to be a problem: They didn’t even wait to move into their new, $1.5 million exhibit before commencing with their courting rituals. "The penguins beat us to the punch," said a curator. "We weren't expecting all this breeding activity until after we opened the exhibit." — Read it at the LA Times

With summer just around the corner, many shoreline communities in the U.S. are debating whether dogs really belong at the beach. While owners argue that pups love the sand and surf, opponents say that some canines are too unruly — and can spread illnesses like hookworm and ringworm. — Read it at USA Today 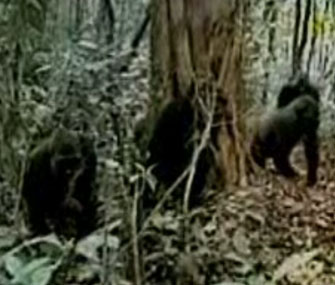 Rare Gorillas Are Spotted Taking a Stroll in Africa

Eight Cross River gorillas were recently captured on video in Cameroon’s Kagwene Gorilla Sanctuary. Conservationists, who believe that there are only about 250 of the apes left in the wild, were stunned to see them casually walking through the woods. — Watch it at Today

The CDC is investigating outbreaks of salmonella across 27 states that have been linked to turtles. Of the 124 people who've gotten sick, 67 percent were children under the age of 10. The initial results of the investigation show that exposure to turtles is the cause of the outbreak. — Read it at DVM 360

Although pet-friendly retirement communities are still in the minority, hundreds now allow residents to move in with pets, which studies have shown can help owners both mentally and physically. “These pets really give [seniors] meaning and value in life, a purpose for getting up in themorning," says Lori Kogan, a professor of veterinary medicine at Colorado State University. — Read it at Seattle PI