May 13, 2014: We've scoured the Web to find the best and most compelling animal stories, videos and photos. And it's all right here. 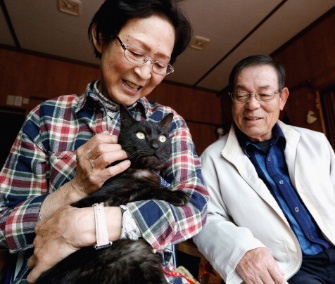 The Asahi Shimbun / Getty Images
Kazuko, left, and Takeo Yamagishi are reunited with their cat, Suika, in Japan.

Kazuko and Takeo Yamagishi were convinced their black cat, Suika, died after disappearing from their home in Japan on March 11, 2011 — the day of the devastating earthquake and tsunami. The couple had Suika for 12 years before the disaster, and spent three months searching for him before giving up hope. Last month, Suika was spotted in a town nine miles away, and taken to Ofunato Health Centre. Workers there found his owners’ contact information on his faded tag, and the Yamagishis had an emotional reunion with their pet. “Where have you been,” said Mrs. Yamagishi, 64. “It’s just like a dream.” It was not clear where Suika spent the last three years, but the new bell on his collar indicated someone had likely been taking care of him. — Read it at the U.K.’s Telegraph

Western lowland gorillas in zoos showed fewer stress-related behaviors when a recording of rainforest sounds was played in their enclosure, according to a new study. The primates responded more strongly to the rainforest sounds than to classical or rock music, or to no music at all, even though they’d never been in a rainforest. “I don’t think it’s as simple as classical vs. rock vs. natural sounds,” said primatologist Susan Margulis, the study’s senior author. “It probably has more to do with [differences in] the rhythm or tempo.” The findings will be published inZoo Biology. — Read it at Live Science

Prince William and Princess Kate’s black Cocker Spaniel is the inspiration for a new series of children’s books by author Aby King. The author says she has her own Lupo lookalike, Lilly, who helped her dream up what the royal pup’s life might be like. In one of the books, Lupo comes to blows with a “dastardly Corgi” named Vulcan. The first book, Lupo and the Secret of Windsor Castle, is set to hit bookstores in September. In it, Lupo is wrongly accused of an attack on a swan. The real-life Lupo appears to be a little more tame. He made headlines earlier this spring when he appeared in an official family photo with the Duke and Duchess of Cambridge and their son, Prince George. — Read it at People Pets 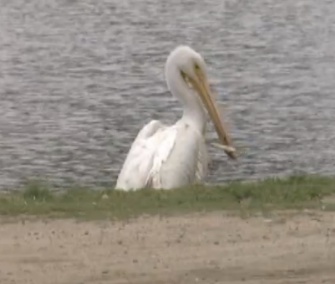 NBC News
Staff at the California Living Museum helped a pelican with a lure stuck in its beak.

With special permission from the state Department of Fish and Wildlife, staff at the California Living Museum came to the rescue of a migratory pelican who had an ocean fishing lure stuck in her beak. The lure made it difficult for the American White Pelican to eat or drink, causing her to become weak. Her rescuers said it had probably been there for about six months. They captured the bird and successfully removed the lure along with some hooks they found in her body, then released her back into the pond. “We’re really excited that she’s here,” said the Bakersfield, California, museum’s Lana Fain. — Watch it at NBC News

Although the official Frog Jumping Day is today, it’s celebrated at the Calaveras County Fair & Frog Jumping Jubilee, which runs Thursday through Sunday in California. The holiday is inspired by Mark Twain’s short story “The Celebrated Jumping Frog of Calaveras County.” The top 50 frogs qualify for the International Frog Jump Grand Finals, on Sunday afternoon. The world record is held by Rosie the Ribeter, who jumped 21 feet, 5 ¾ inches in 1986. There’s a $50 cash prize for breaking the long-held record. — Find out more from Frog Town