March 2, 2017: We've scoured the Web to find the best and most compelling animal stories, videos and photos. And it's all right here.

Twitter / HarrisburgFire
Firefighters in North Carolina cut through siding to free Crystal the orange tabby cat from the spot where she was trapped.

Firefighters in Harrisburg, North Carolina, came to the rescue of an orange tabby cat who found herself in a very tight spot on Wednesday. Officials think Crystal was chasing something at her home when she fell and got herself wedged in between the chimney and the decorative siding that surrounds it. Her meows helped lead firefighters to her location within the two-story chimney, and they had her out within an hour. “We used our best judgment on where we thought she could be and pulled the boards off the side of the house and cut a hole in there, and no sooner than we were sticking our hands in, her head was sticking out of that hole,” said the fire department’s public information officer, David Bradshaw. “Immediately she said, ‘Hey, I’m getting out of here.’ She climbed out right into the firefighter’s arms.” — Read it at ABC News

Researchers from the U.K. detected a new species of bush baby — a tiny, bug-eyed mammal — living deep in an African jungle. The team found the 6-inch mammal when it noticed one of the calls they were hearing didn’t sound anything like the 18 known species of bush baby, also known as a galago. The Angolan dwarf galago or Galagoides kumbirensis, is named for the forest where it was found. Unfortunately, the new species may already be endangered due to deforestation in its habitat. The species is described in the American Journal of Physical Anthropology. — Read it at National Geographic

A Hollywood makeup artist and her fiancé, a Silicon Valley executive, are going all-out to try to find their beloved dog, who ran off from his pet sitter on Feb. 13. Trendee King and James Galley have put their wedding on hold as they search for Theo, a Brussels Griffon. They’ve hired a private investigator, passed out thousands of flyers, offered a $3,500 reward and taken to social media in their efforts to bring Theo home. King is still confident Theo will be found. “Theo is my best friend, we did everything together — grocery shopping, the dog park — we slept nose-to-nose,” King said. “There's something in me that knows he's alive and knows he's OK. All of this is happening for a reason.” — Read it at Fox News 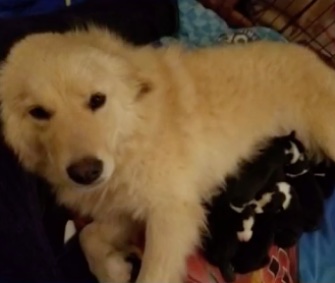 NBC 16
Daisy, whose own puppies died in a fire, has taken in eight puppies whose mom died suddenly after she gave birth.

Two sad situations have turned into one heartwarming story in Oregon. On Feb. 15, Lorna Murphy was devastated when her Border Collie, Chloe, died suddenly after giving birth to eight puppies. Murphy and her daughter were mourning and spending day and night feeding the puppies every two hours using syringes. But when they were 10 days old, she heard the sad story about a dog named Daisy, who’d lost her own puppies in a barn fire in a location that was about an hour away. Murphy reached out to the owner of the dog, Jessica Woodruff, who said Daisy was “so sad and so heartbroken.” They arranged for Daisy to meet Chloe’s puppies. “Daisy let them nurse right away,” Murphy recalls. “The puppies were so happy to have mama milk, they nursed and nursed and promptly fell asleep on her.” Daisy has taken to the pups, sweetly cleaning each of them as if they were her own. The puppies are now staying with Daisy until they’re old enough to wean. Then, Murphy will keep one to remember her Chloe, and will find homes for the other seven. — Read it at People Pets and watch it at Oregon’s NBC 16

A red tail hawk got trapped in the grille of a Honda SUV after it was struck on a Massachusetts highway on Saturday. The driver pulled off at the next exit and stopped at a gas station, where she was shocked to discover that the bird had survived and was stuck in her car grille. Firefighters were able to quickly remove the hawk using a large blanket and gloves, and brought it to a local animal hospital. The bird is expected to recover from the ordeal. — Read it at UPI