Jan. 21, 2014: We've scoured the Web to find the best and most compelling animal stories, videos and photos. And it's all right here. 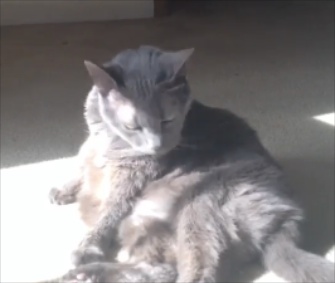 News Leader
Trigger is back to her favorite spot in the sun two months after helping to save her owner from a massive stroke.

When Missouri resident Erna Pratt returned home from the hospital last month after being treated for a stroke, one of the first things she did was thank her cat, Trigger. Pratt says she was in her kitchen making toast on Nov. 20 when she began suffering stroke symptoms. She tried calling to her adult daughter, Mary, who was asleep in her room, but she couldn’t make her voice loud enough. So, she turned to her 13-year-old cat, who was meowing nearby, and said, “Mom needs help. Can you go wake Mary up?’” Trigger did as she was asked, meowing loudly as she ran down the hall. Thanks to Trigger, Pratt’s daughter called 911 and Pratt arrived at the hospital in enough time to be treated with a drug that can dissolve blot clots, dampening the effects of the massive stroke. “She literally saved my life,” Pratt, 75, said of her hero cat. — Read it at Springfield, Missouri’s News Leader

Best known for his role as Dos Equis’ “Most Interesting Man in the World,” actor and dog lover Jonathan Goldsmith has now teamed up with the outdoors company Orvis to raise money and awareness to fight cancer in man’s best friend. Goldsmith and his dog, Willy, filmed two online commercials for the Orvis Cover Dog contest, which supports the Morris Animal Foundation. The cover dog contest runs through Feb. 15, and the winner will be crowned the Million Dollar Dog. The photo contest started in 2009 and has raised nearly $1 million for the Morris foundation, which is dedicated to advancing veterinary medicine for animals. — Find out more from Orvis

Scientists fitted a large group of black birds with tiny GPS devices, and gathered unprecedented data on every wing flap. They found that the birds use precision to choreograph the flapping of their wings and make their trip less taxing. The researchers tracked 14 juvenile ibises when they migrated between Austria and Italy. They found that when the birds flew in a V, they positioned themselves so that they could use the updraft in another bird’s wake, allowing them to conserve their energy. The results were reported in the journal Nature. — Read it from the AP via Fox News 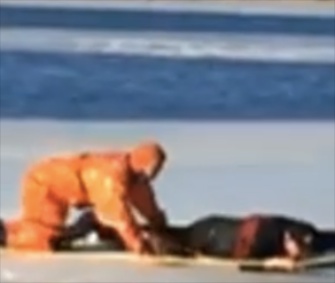 CNN
A deaf man and his dog were rescued after falling through the ice in Missouri.

Man and Dog Saved From Lake

Rescuers who arrived at the icy Creve Coeur Lake in Maryland Heights, Mo., at first couldn’t figure out why a man who’d fallen into the frigid water with his dog wasn’t responding to their calls. Then, they realized that the dog owner’s hearing aid had stopped working, and he couldn’t hear that help had arrived. “He was yelling to us, ‘I think I’m frozen,’” said a witness. Firefighters helped him and the dog out of the water. The man was treated for hypothermia, and both he and his dog are recovering. — Watch it at CNN

Being around the set of a cannibalistic psychological thriller all day takes its toll. So, executive producer Bryan Fuller says he’s discovered a way to take his mind off his work on the NBC series Hannibal to avoid having nightmares. "For me, with crime and crime stories, I'm sensitive," he told reporters Sunday at the Television Critics Association press tour in Pasadena, Calif. "I look at dog videos all day to put me in a happy place." The show returns for its second season on Feb. 28. — Read it at Today