July 2, 2014: We've scoured the Web to find the best and most compelling animal stories, videos and photos. And it's all right here. 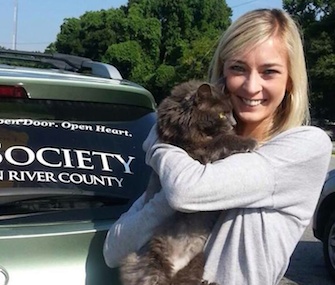 Humane Society of Vero Beach & Indian River County
Ashley Moore was reunited with her cat Ava, who was found 500 miles from home.

Ava, a 2-year-old Tiffany cat, was reunited with her owner, Ashley Moore, in Georgia Saturday. The cat disappeared from Moore’s Brookhaven, Georgia, home last month and was found in Vero Beach, Florida, four days later. The woman who found Ava wandering brought her to the Humane Society of Vero Beach & Indian River County, where the staff discovered her microchip. The phone number listed had been disconnected, but they were able to send a letter to Moore’s father saying Ava was safe and staying at the shelter. Moore thinks Ava may have hidden underneath a vehicle or in a U-Haul moving truck for the trip. When Moore’s plans to have the cat transported 500 miles back home fell through, the shelter’s director of animal care stepped in to help, driving Ava to Georgia to be reunited with her owner. “I guess Ava decided to take a vacation in Vero Beach, but I’m so happy she’s finally back with me,” Moore said. — Watch it at Atlanta’s WSBTV

Chilean devil rays are usually found in shallow waters. But satellite tags reveal that they can dive down nearly 6,000 feet, to depths few other species are able to reach — and they do it at speeds of 12 to 13 mph. “There’s no way I thought they were going that fast,” said the study’s lead author, Simon Thorrold of the Woods Hole Oceanographic Institution. He called their speed and the depths they reached “shocking.” Thorrold said the rays are likely moving so fast because they use their muscles to generate body heat on the way down. The study was published in the journal Nature Communications. — Read it at National Geographic

Last month, Tess, an Asian elephant at the Houston Zoo, got a lot of attention for the weight-loss program she was on. Sadly, though, Tess miscarried twin calves about halfway through her gestation, the zoo said Tuesday. Twin pregnancies in Asian elephants are “extremely rare and the survival rate after birth of the calves is exceedingly unlikely,” the zoo said in a blog post. “In Asian elephants, twins may share a common blood source which can compromise the health of the calves. Twins can also present complications in delivery and compromise the health of the mother,” said Dr. Dennis Schmitt, DVM, world-renowned elephant reproductive expert and professor emeritus at Missouri State University.Tess is being closely monitored for signs of physical or psychological effects from the miscarriage. — Read it at Reuters via Yahoo 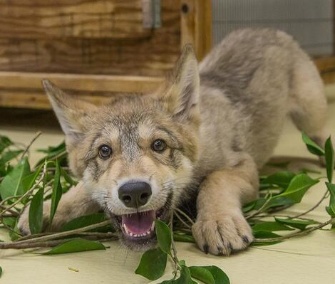 San Diego Zoo / Twitter
Shadow, a gray wolf pup, will be an animal ambassador at the San Diego Zoo.

Shadow, a playful 2-month-old gray wolf pup, is getting ready for his role as an animal ambassador at the San Diego Zoo. The adorable 23-pound pup is in the process of completing a 30-day quarantine at the Children’s Zoo nursery, where he’s being exposed to new smells and sights to prepare him for his new job. "He sees people in the window when they come by to visit; these things are all new and interesting to him. You'll see him key in on something and really get in tune with it," said Kim Weibel, senior keeper of veterinary services at the zoo. "That's a neat thing with wolves, the way they tune into things; they are very intelligent.” — Read it at California’s Imperial Valley News

Daniel Radcliffe is best known for his role as Harry Potter in the well-known film series, but does he have a new gig as a New York City dog walker? The British actor was photographed in Manhattan’s Bryant Park walking canines of all sizes, with their leashes clipped to a special dog-walking belt. As it turns out, the actor was shooting a scene for "Trainwreck," a new movie directed by Judd Apatow and written by Amy Schumer. But Apatow wasn’t revealing anything when a Radcliffe fan site posted pictures of the actor with the dogs. “He was just walking his dogs," the director coyly Tweeted. — See photo at E!Online