Dec. 13, 2012: We've scoured the Web to find the best and most compelling animal stories, videos and photos. And it's all right here. 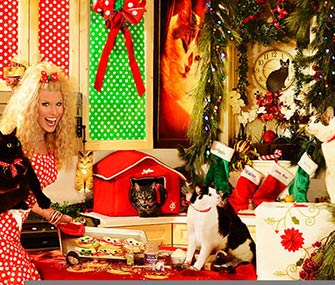 Few would deny that Howard Stern knows how to make a statement. And his family holiday card is no exception. On Wednesday, the shock jock and America’s Got Talent judge (and animal lover) tweeted the masterpiece featuring his wife, Beth Ostrosky Stern, in their home, holding a tray of kitten-shaped cookies along with the couple’s four cats, as their Christmas stockings hang nearby. The pair made headlines earlier this fall when they added Charlie Boy, an adult cat who they adopted, to their brood, which already included Apple, Walter and Leon Bear. — Read it at Us Weekly via Today

After being caught wandering in a Toronto IKEA on Sunday in his stylish shearling coat, Darwin (a.k.a. IKEA Monkey) has been spending his days at the Story Book Farm Primate Sanctuary in Ontario. But the 7-month-old snow macaque’s owner, lawyer Yasmin Nakhuda, is vowing to get the monkey she calls her “child” back. “The plan is to try to get him and move out of Toronto where I can own him,” she told ABC News. The sanctuary's founder, however, says authorities have told her that the monkey will be staying there indefinitely. Owning exotic pets is illegal in Toronto, but officials don’t plan to press charges. Rules for exotic animal ownership are determined by municipalities in Canada. — Read it at ABC News

We’ve heard about dogs being used to soothe kids in courts and at school, but a photo that’s gone viral this week shows how a pediatric dentist in Williamsville, N.Y., Dr. Paul Weiss, brings his dog, Brooke, to work to help calm the nerves of his young patients. Weiss says the Golden Retriever, who completed a therapy dog certification test, is gentle and friendly, always accompanied by an adult, and only visits when she’s called upon. — See photo at the Huffington Post 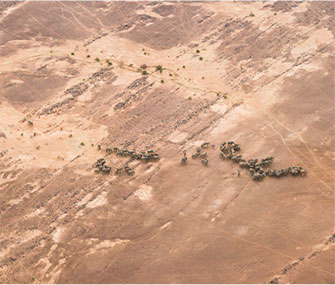 Chyulu Smith
Elephants in Mali's Gourma desert have adapted to living with little access to water.

Using GPS tracking collars, researchers found that a group of Gourma elephants near Timbuktu travels 12,355 square miles through the deserts of Mali each year in search of food and water. "It's incredible these elephants have survived,” said the study’s lead author, Jake Wall of the conservation group Save the Elephants, Kenya, and the University of British Columbia. “They have a truly stressful life with the lack of water and food, and their giant range reflects that." Although the continent’s northernmost elephants don’t necessarily walk farther than East and Southern African elephants, their movements are spread out over an area 150 percent bigger than those reported in Namibia, and 29 percent larger than those in Botswana, the researchers said. The study’s findings were published in the journal Biological Conservation. — Read it at Live Science

The zoo wants the public to weigh in on a name for its 2-month-old male Grevy’s zebra. The choices are: Utambo, which means “prancing” in Swahili; Nissa, the name of a guide in Kenya, where wild Grevy’s zebras are found; Pembe, which means “horn” for the Horn of Africa; and Ally, pronounced “ollie,” the name of an exchange student from Kenya who’s staying with one of the Phoenix Zoo’s keepers. You can vote here until Friday night. — See photos at Zooborns