Jan. 7, 2014: We've scoured the Web to find the best and most compelling animal stories, videos and photos. And it's all right here. 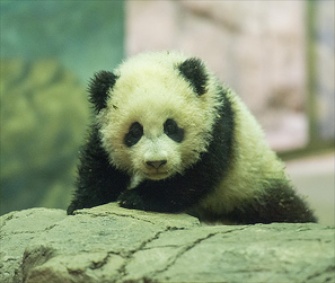 Abby Wood, National Zoo
Bao Bao the panda cub made her media debut at the National Zoo in Washington on Monday.

The National Zoo’s 4-month-old panda cub put on a show for the cameras on Monday as she made her media debut, adorably climbing and tumbling around her outdoor enclosure. At nearly 17 pounds, Bao Bao made her first steps into the spotlight. Next week, members of the Friends of the National Zoo will get the chance to meet her, and on Jan. 18, she’ll make her official public debut. Visitors will get the chance to see the cub playing in her yard — as long as she’s not too tired. "We're working on the yard and trying to cub proof it," said keeper Laurie Thompson. "She's definitely independent. She is not at all worried that Mom is not there all the time.” Mei Xiang’s cub, whose name means “precious,” will live at the Washington zoo until she’s about 4 years old, when she’s expected to head to China to be part of a breeding program for the endangered bears. — Watch it at USA Today

A new study that recorded dogs’ leg and paw movements while they swam in a rehabilitation pool at the University of Pennsylvania found that across breeds large and small, dogs swim with a gait that’s just like how they run. When a dog does a slow run, diagonal pairs of legs move together, and that’s what researchers found they do in the water as well. The only difference was that the dogs moved their legs faster and somewhat beyond the normal range of motion for a run. The team of biologists watched the underwater motion of eight breeds, from the tiny Yorkshire Terrier to the huge Newfoundland. The study was presented at the 2014 Society for Integrative and Comparative Biology in Texas. — Read it at Live Science

The Army Corps of Engineers released a highly anticipated study on Monday that found that keeping Asian carp and other invasive species out of the Great Lakes would take at least 25 years and come with a price tag of billions of dollars. The corps offered eight strategies for protecting the Great Lakes from 13 invasive species, which are moving upstream from the Mississippi River. Most of the plans included building permanent barriers. The study was commissioned by Congress in July 2012. Congress would need to authorize any of the plans before any work could begin. — Read it at the Christian Science Monitor 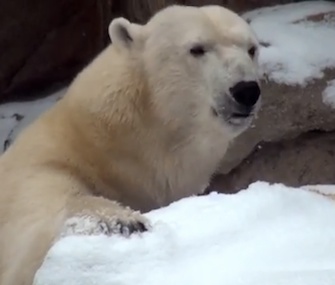 Lincoln Park Zoo / YouTube
Anana, a resident of a Chicago zoo, will stay indoors during the extreme cold there.

Thanks to the polar vortex, temps were below zero in Chicago on Monday. That was even too cold for the Lincoln Park Zoo’s polar bear, 12-year-old Anana. She’ll be staying indoors in her climate-controlled area during this extreme weather. "She doesn’t typically enjoy the very cold much,” said zoo spokeswoman Sharon Dewar. “Few of us are accustomed to this cold.” Polar bears in the arctic typically put on a layer of blubber in the late winter, but Anana has become accustomed to the warmer Chicago weather, and doesn’t have that layer of cold protection. — Read it at DNAinfo Chicago

Baby the Dog Gets a New Home

Yesterday, we told you about Baby, the dog who was rescued by fishermen after spending hours treading water two miles offshore in Tampa Bay. Her rescuers haven’t had any luck finding her owners — despite her having a microchip and lots of local and national news coverage, no one has come forward. But in the meantime, someone who adores her and wants to help is waiting in the wings. Kathy Klein and her husband brought items like a dog bed and blanket to the pup where she was staying on boat with Tony Basile. Klein and the dog hit it off, and Basile allowed Klein to bring the pup home. She plans to adopt the dog if her owner isn’t found. "There but for the grace of God, she wouldn't be here," Klein said. "I'd name her Grace and call her Gracie." — Read it at the Tampa Bay Times