December 27, 2011: We've scoured the Web to find the best and most compelling animal stories, videos and photos. And it's all right here. 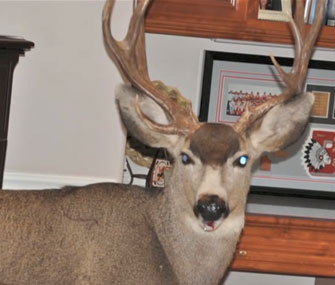 CNN
This buck broke into a Utah home on Christmas Eve.

A Salt Lake City family heard the prancing of hooves on Christmas Eve — for real. A buck apparently tripped and crashed through a window into their basement. He then made his way around the house, trampling over Christmas gifts, until wildlife officials were able to corral him. — Watch it at CNN

A Kemp’s Ridley sea turtle known as Johnny Vasco da Gama will soon be released into the Gulf of Mexico following quite the journey. In 2008, Johnny crossed the Atlantic and washed ashore in Europe, exhausted from what researchers say was a yearlong, 4,600-mile — and likely unintentional — trek. After the endangered turtle was nursed back to health, he caught a flight home in a special container. On Tuesday, he’ll be back in his home waters. — Read it at NPR

A lot can change in 55 million years. Researchers say that the earliest elephants — who were only about the size of a pig — were flat-footed and stood tiptoed, like a deer. But over a period of 15 million years, they developed a false sixth toe on each foot to help prop them up. — Read it at The New York Times

Florida’s Congressional delegation is asking the Obama administration to ban the importation and interstate trade of exotic snakes, including the Burmese python and the green anaconda. The snakes have long been a problem in the Everglades, where they often end up after being released by owners or escaping from their homes. — Read it at The New York Times

Much like humans, animals sometimes need a blood transfusion during surgery or following an injury. Dogs can voluntarily give blood at the Canine Blood Donor Program in Maryland, where their owners make a yearlong commitment to bring their healthy canine in every five to seven weeks. — Read it at Today