June 7, 2013: We've scoured the Web to find the best and most compelling animal stories, videos and photos. And it's all right here. 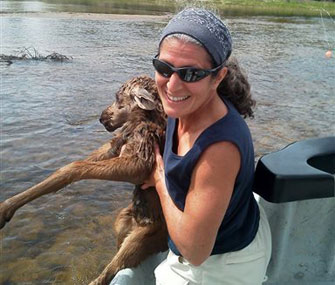 Moose Reunited With Its Mother

One little Montana moose is lucky Dr. Karen Sciascia of Red Hill, Pa., was out on a fishing tour of the Big Hole River earlier this week. With her Four Rivers Fishing Co. guide Seth McLean, Dr. Sciascia noticed a cow moose and her calf having difficulty crossing a spot on the river where a turbulent current was created by two channels. The baby moose was unable to follow its mother onto the river bank and was swept away by the current. Luckily Dr. Sciascia and McLean were watching. "We found it with its little nose just above the water," Sciascia says. "We got up alongside it and I just grabbed the little bugger. I scooped it up from the river under its front legs." The pair then brought it to the river bank where it was reunited with its mother. — Read it at NPR

UCLA psychologists who studied the communicative gestures of chimpanzees, bonobos and human infants found that they are very similar. Gestures made by all three species included reaching, pointing with fingers or the head, and raising the arms to ask to be picked up. "Gesture appeared to help all three species develop symbolic skills when they were raised in environments rich in language and communication," said Gillespie-Lynch, who conducted the research while she was at UCLA. This pattern, she said, suggests that gesture plays a role in the evolution, as well as the development, of language. — Read it at Science Daily 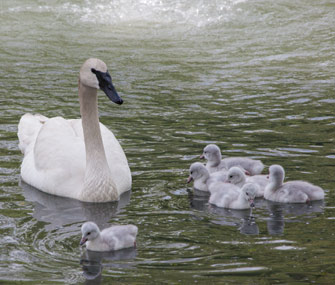 Six trumpeter swan cygnets have hatched at the Lincoln Park Zoo in Chicago. These are the first of the endangered birds to be hatched at the zoo since 2009. The chicks will eventually be released into the wild as part of the zoos trumpeter swan reintroduction and recovery program. “Trumpeter swans were literally on the brink of extinction just a few decades ago,” said Hope B. McCormick Curator of Birds Sunny Nelson in a statement. “Now, thanks to reintroduction efforts like this one, these beautiful birds can be found throughout the region. Chicks hatched at Lincoln Park Zoo are actually breeding in the wild and creating the next generation."

The Sydney Zoo is hand-rearing a rare leaf monkey baby. Zookeepers took over care of the baby after its mother failed to produce enough milk. The species is critically endangered and there are thought to be less than 500 left in the world. The Sydney Zoo is the only zoo in Australia currently breeding the monkeys. — Watch it at Today

A hedgehog named Biddy is taking the Internet by storm. The hedgehog has gained popularity on Instagram for photos of his adventures posted by his owner. From a day of hiking to a day at the beach, Biddy appears to be quite the well traveled pet! — Read it at BuzzFeed