May 17, 2013: We've scoured the Web to find the best and most compelling animal stories, videos and photos. And it's all right here. 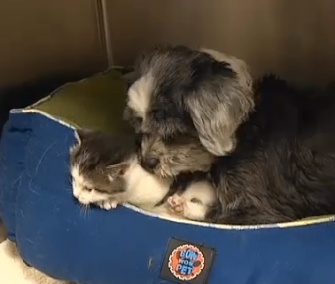 Fox Carolina
A dog in South Carolina has adopted this kitten as her own.

A South Carolina resident called police on Monday to report she’d heard a dog barking since Saturday. When animal control officer Michelle Smith followed the noise down a steep embankment to a ravine, she found a 5-year-old dog — who was nursing a tiny kitten. "I'm thinking that it just couldn't get back up with the kitten, and I don't think it was willing to leave the kitten," Smith said. The officer brought the pair to a local shelter, Anderson County P.A.W.S., where the staff is now supplementing the dog’s nursing with bottles. They said the dog appeared to be someone’s pet, and they’re hopeful that her owner will come to claim her — and to make the kitten a part of their home, too. — Watch it at Fox Carolina

New research shows that the H1N1 flu virus that caused a pandemic in 2009 has been found in two northern elephant seals off the coast of central California. This is the first report of the swine flu virus being found in any marine mammal. Researchers at the University of California at Davis aren’t sure how the animals contracted the illness. “The seals on land in early 2010 tested negative before they went to sea, but when they returned from sea in spring 2010, they tested positive. So the question is where did it come from?” said lead author Tracey Goldstein in a statement. The findings were published in the journal PLOS ONE. — Read it at Discovery News

Lady beetles that are native to China and Japan were introduced in the U.S. and Europe to keep greenhouse aphid populations in check. But once they spread beyond the greenhouses, they have quickly taken over native beetle species. Now, scientists in Germany have discovered that the Asian ladybug species has tiny fungus-like parasite body cells in its body fluid that can be lethal to native ladybug species. The study was published in the journal Science. — Read it at Science Daily 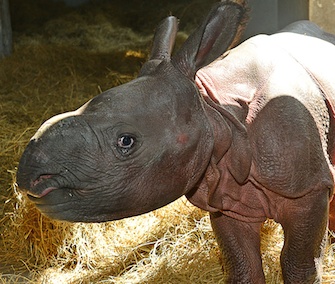 Lowry Park Zoo
Jiyu, an Indian rhinoceros calf, was born on May 9.

Just in time for Mother’s Day, Jamie, an endangered Indian rhinoceros, gave birth to her third calf at Tampa’s Lowry Park Zoo. The male calf was given the name Jiyu, which means compassionate friend, by the zoo’s animal care team. Mom and baby are spending time off exhibit for now, for the calf’s safety and to give them time to bond. With only 54 Indian rhinos in zoos accredited by the Association of Zoos and Aquariums, and only 2,850 in the wild, the calf’s birth is a significant milestone for his species.

Here’s a happy ending that will melt your heart. A Dachshund with one eye was among a group of dogs rescued from a shelter in Alabama by a group called Badass Brooklyn Animal Rescue. The group named the dog Captain Morgan, like a pirate, and he was taken care of by one of their directors, Eva Armstrong, until he was adopted by a family several months ago. On May 5, the rescue had a block party, where Captain Morgan was reunited with his rescuer — and from the looks of the photo, he was very grateful to see her. A picture of the dog, who’s nicknamed Cappy, resting his head on Armstrong’s shoulder went viral this week. — See photo at Yahoo News