Nov. 4, 2013: We've scoured the Web to find the best and most compelling animal stories, videos and photos. And it's all right here. 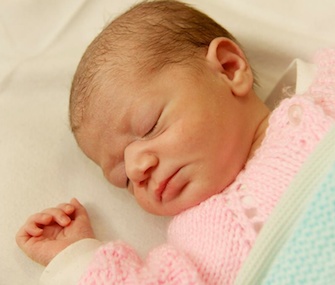 West Midlands Police
Police released this image of baby Jade, who was named for her canine hero.

A retiree was walking his German Shepherd, Jade, in a park in Birmingham, England, on Thursday afternoon when she suddenly ran toward the bushes, laid down next to a bag that had been left behind, and refused to move. When owner Roger Wilday got closer, he realized that the bag was a carrier — with a baby inside. Wilday ran to a friend’s house nearby to call the police. They brought the 6-pound baby girl to the hospital, where staff members named her for her rescuer, 9-year-old Jade. "Jade’s never found anything before,” said Wilday’s wife, Catherine. “She must have heard the baby crying as these dogs have very good hearing, plus she’s very keen on our grandchildren.” On Friday, West Midlands police, who are searching for the baby’s mother, released pictures and video of the “alert, happy and contented” little girl, who’s still recovering in the hospital. The Wildays, who have four children and five grandchildren, are hoping to get the chance to visit baby Jade. — Read it at the U.K.’s Birmingham Mail

The U.S. environmental group WildAid has some rare good news for sharks. Consumption of the Chinese delicacy shark fin soup dropped 50 to 70 percent in the last two years. About 100 million sharks are brutally killed each year to make the soup, but until just a few years ago, most Chinese people didn’t know that the soup came from sharks because its name translates to “fish wing” soup. Public relations campaigns, including one with an appearance from pro basketball player Yao Ming in 2006, and a government campaign against lavish banquets where the dish is served, seem to have helped. "Consumption is based on ignorance rather than malice,” said WildAid’s Peter Knights. — Read it at Live Science

You might expect it in Miami, but not in Chicago. A maintenance worker at Chicago O’Hare International Airport was surprised to find a foot-long alligator under an escalator at the facility. Police captured the reptile by covering it with a trash can, and it’s now being cared for by the Chicago Herpetological Society. "We're trying to get it healthy and find a place for it,” said Jason Hood, the group's president. Once authorities give the all clear, the gator will likely be moved to an out-of-state alligator farm. — Read it from AP via USA Today 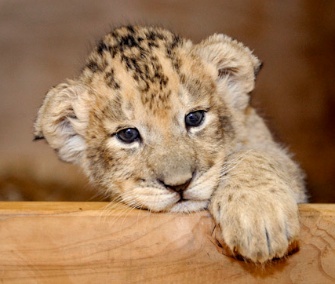 Maryland Zoo
The female lion cub peeks out of her nest box at the Maryland Zoo.

The birth of the Maryland Zoo’s first lion cubs this month has been bittersweet. Their keepers have stepped in to give them around-the-clock care after their mother, Badu, passed away a few days after their Oct. 4 birth. Badu suffered from complications after a surgery to remove two additional cubs, who sadly didn’t make it. The surviving brother and sister are now about 8 ½ pounds each and appear healthy, the zoo said. Their eyes are open and they’re beginning to show interest in playing with each other. “We are measuring their progress and evaluating the situation day by day,” said Margie Rose-Innes, assistant general curator at the zoo. “Ideally they will be able to be introduced to the other lions, but that will be some time in the future. For now, their continued health and well-being will be our focus.” The zoo plans to ask the public to help name the cubs in a few weeks. — Read it at Zooborns

PiP, which stands for Positive Identification of Pets, uses facial recognition software to help find lost pets. Owners upload a few photos of their pet to the app, include a few other details, and it sends an alert to other PiP users in the region, including area shelters and veterinarians. Photos of found pets are also cross-referenced with those of missing pets to try to make a match. Developer Philip Rooyakkers is hoping the app will help lost animals to be reunited quickly with their rightful owners. — Read it at ABC News