Sept. 4, 2014: We've scoured the Web to find the best and most compelling animal stories, videos and photos. And it's all right here. 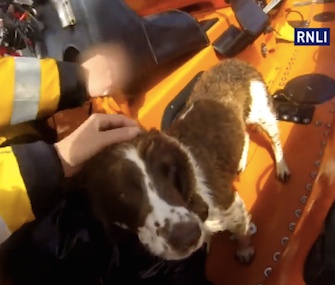 YouTube
A lifeboat crew rescues Sprig from a 30-foot ledge in England.

Mark and Susie Sanders of Devon, England, were walking along a 1,000-foot cliff with their two dogs when one of the dogs wandered off. They organized search parties to find Sprig, a Springer Spaniel and had no luck. But nine days later, a lifeboat crew was training at the bottom of the cliff and spotted the dog trapped on a 30-foot ledge. They brought the boat over and safely got the happy dog inside. “He did seem rather pleased to see us," said Andrew Escott, a member of the Royal National Lifeboat Institution rescue crew. The rescuers aren’t sure how Sprig managed to get down the cliff and cling to the ledge where he was stranded. They think he survived the week without food or water by lapping up moisture from the moss and rocks around him. Sprig was reunited with his owners a few hours later. "I just could not believe it when we had a call to say the lifeboat crew had spotted him and rescued him," said owner Susie Sanders. "It's amazing: the best news ever. Bless them." — Read it at the Huffington Post

Cockatoos Learn Tool Use From Each Other

A new study finds that Goffin’s cockatoos can learn how to make and use tools from watching each other. It’s the first evidence in a lab setting that birds can socially transmit tool use. A cockatoo named Figaro had been seen making a rake to pull some nuts toward him. The researchers had a group of six cockatoos watch him at work and found that they became proficient with tools, too. Three of the birds even took what they learned a bit further, creating their own more efficient tool. "This means that although watching Figaro was necessary for their success they did not imitate his exact motor activities," said Dr. Alice Auersperg, who led the study at the University of Vienna in Austria. "This is typical of what psychologists would call emulation learning." Their findings were published in the journal Proceedings of the Royal Society B. — Read it at Discovery News

On Wednesday, officials in Mexico presented the first litter of Mexican gray wolf pups conceived there through artificial insemination. It’s part of an effort to save the most endangered type of gray wolf, which was hunted to extinction in the wild there 30 years ago. The two pups were born on May 26 to a mom from a particularly valuable bloodline for the species. The news comes two months after Mexico announced the birth of the first-known litter of wild-born cubs. Their parents are a pair of wolves who’d been reintroduced to the wild. — Read it from AP via Yahoo 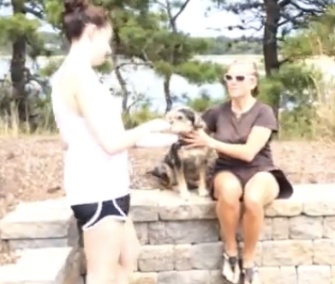 People Pets
Meredith Vieira and her dog, Jasper, take the Pies 4 Paws challenge to raise money for the ASPCA.

Vieira Gets Pied for Animals

Animal activist and former NBC correspondent Jill Rappaport is putting a new twist on the incredibly successful ALS Ice Bucket Challenge. Late last month, she kicked off Pies 4 Paws, challenging people to take a pie to the face — and of course share video of it on social media. Participants are encouraged to donate to the ASPCA — or to adopt a pet from a local shelter. She already has support from one former colleague: dog lover Meredith Vieira. The Today special correspondent shared a video where her daughter, Lily, smashes a cream pie in her face — and gives some to her dog, Jasper, too. Vieira then extended the challenge to Howard and Beth Stern, Betty White and her former co-anchor, Matt Lauer. We’ll be watching for their videos! — Read it and watch it at People Pets

Visitors at the Belfast Zoo got a surprise Monday when they witnessed the birth of a Rothschild’s giraffe. Part of the most endangered subspecies of giraffe, the calf was born to mom Neja and dad Finn. “Keepers were onsite throughout the labor to ensure that everything went smoothly. Since the birth, we have been giving the pair time to bond,” said curator Alyn Cairns. The Belfast Zoo is the only zoo in Northern Ireland, and the staff names their giraffe calves after towns and villages there that begin with “Bally.” They don’t yet know if the calf is a boy or a girl but they have names ready when they find out: Ballyrory if it’s a male and Ballymena if it’s a female. — Read it at Zooborns and see more cute zoo baby photos