May 4, 2012: We've scoured the Web to find the best and most compelling animal stories, videos and photos. And it's all right here. 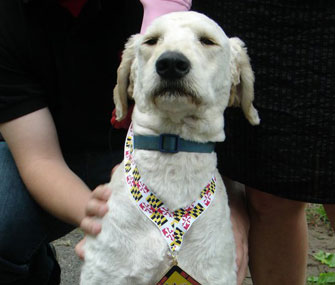 Facebook
Dozer shows off his medal after finishing a half-marathon last year.

Last year, when Dozer the dog saw hundreds of people running by his house during a half-marathon, he spontaneously joined them. When his owner discovered that he was missing, a neighbor told her that she’d seen Dozer at the finish line for the race, which is a fundraiser for Maryland’s Greenebaum Cancer Center. Video surfaced confirming that he’d finished the run — eight miles from his house. Dozer made it home the next day, dog-tired.

Race organizers gave him a medal, and started a fundraising page in his name, where he amassed $25,000 in donations. This year’s race is scheduled for this weekend, and officials have added a new event: Dozer’s Dash, an eight-mile race-within-a-race. — Read it at the Baltimore Sun

At the new Café Neko in Vienna, Austria, five cats are part of the ambiance. They roam free, ready to be stroked by patrons. There’s just one rule at the city's first kitty cafe: no dogs allowed. — Read it at Fox News

According to researchers, eye size helps to determine the maximum speed at which an animal can run. "If you can think of mammals that are fast like a cheetah or horse, you can almost guarantee they've got really big eyes," says University of Texas at Austin researcher Chris Kirk. "This gives them better vision to avoid colliding with obstacles in their environment when they're moving very quickly." — Read it at Science Daily

When racehorses come out of the gates at the Kentucky Derby this weekend, they'll be giving jockeys a ride. But could they do it on their own? "We wouldn't even entertain the thought," says a spokesman for Churchill Downs. But a filly who shot out of a gate on her own in March inspired a Wall Street Journal writer to explore the possibility. Racehorses still "expect the rider to help" guide them, said a trainer. — Read it at the Wall Street Journal

Tattoos for Pets Are a Popular Trend

Does your pet need to express his individuality? Some dog owners are turning to groomers who specialize in pet tattoos — airbrushed designs crafted with non-toxic dyes. — See the photos at USA Today

It’s tough to own a dog in the city, so Beneful has outfitted the Columbus Circle subway station in Manhattan with huge screens that allow straphangers to play with virtual dogs. — See the photos at Dogster