March 7, 2014: We've scoured the Web to find the best and most compelling animal stories, videos and photos. And it's all right here. 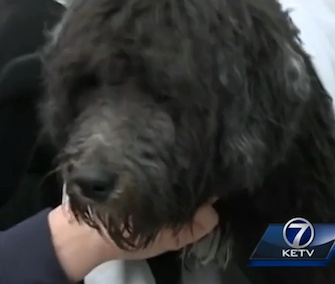 KETV
Sparky's owner pulled him from an icy lake, and he helped two men save her after she fell in.

There were two rescues from an icy lake in Lincoln, Neb., on Wednesday morning. A woman who pulled her dog from the water fell in herself. Luckily, Steve Dye and Ray Frana, who work for the U.S. Army Corps of Engineers, were checking a dam at the lake and saw the dog standing on the ice next to a hole. When they get closer, they saw the woman in the hole, struggling in the frigid water about 40 feet off shore. While Dye called 911, Frana grabbed a rope from their truck and crawled out onto the ice with it. When the dog came to him, he tucked the rope into his collar, and Sparky brought it out to his owner. She grabbed the rope, and Frana pulled her out and got her safely to shore. Both the woman and her dog warmed up in the truck until help arrived. The woman was taken to a hospital as a precaution. “He’s the actual hero,” Frana said of Sparky. — Read it from AP via Iowa’s Sioux City Journal and watch it at Nebraska’s KETV, and read our story on how to stay safe around ice

The shark, named Lydia, was tagged off the coast of Florida by scientists a year ago with a real-time satellite tracking device. Since then, the marine non-profit Ocearch has been following along as the 14-foot, 6-inch great white has migrated more than 19,000 miles. Now she’s about to cross the mid-Atlantic, bringing her closer to Europe than to the U.S. Lydia is the first white shark to be tracked across the Atlantic, and she’s providing researchers with previously unattainable data on shark movement, biology and health. The information they collect could help keep both the sharks and the public safe. — Read it at Discovery News

Web Cams Give a Peek at Bald Eagle Nests

This year’s bald eagle nesting season is at its peak, making this the perfect time to get a bird’s eye view of what’s happening in their huge nests. Some popular web cameras were set up at their nests by scientists to gather information about the raptors’ nesting behavior, and many have developed a strong public following. "Certainly there's conservation value in overall awareness and people caring about eagles and subsequently the rest of the world," says Drew Becker, an eagle biologist with the Fish and Wildlife Service. Bald eagles were in danger of extinction just 40 years ago, but they’ve rebounded in a conservation success story. "I don't believe they would have recovered as quickly as they did if people didn't care,” Becker said. National Geographic has rounded up five bald eagle cams to keep your eye on. — Read it at National Geographic 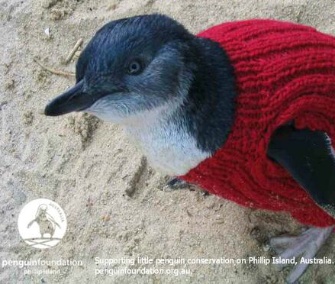 Twitter / PenguinFdn
The Penguin Foundation is asking knitters around the world to make sweaters for its rescued penguins.

The Penguin Foundation in Australia is calling on knitters around the world to help them make enough of the sweaters they need for the little penguins in their rehab facility. The penguins who are residents there are recovering after being caught in oil spills, and the jumpers help to keep them warm and stop them from trying to clean the toxic oil off with their beaks. The center’s Lyn Blom says the little sweaters are quick to make, and the group, based on Phillip Island, shared their pattern on their Twitter feed. — Read it at Australia’s ABC Melbourne

The Toronto Zoo shared a video on Thursday of its adorable 4-month-old polar bear unveiling the name the public decided on for him in an online poll. He pulled a cover off a sign with his name — Humphrey — and seemed to take it in for himself for a bit before moving aside so viewers could see it. Humphrey was also given an Inuit name, Piujuq, which means “good and nice.” On official zoo documents, he’ll be referred to as Humphrey Piujuq. The cub was born in November and survived thanks to the efforts of his animal care team. He was removed from his mom, Aurora, when two of his littermates died. Humphrey spent a lot of time in intensive care but is now thriving. — Watch it at Canada’s CBC News