April 11, 2017: We've scoured the Web to find the best and most compelling animal stories, videos and photos. And it's all right here. 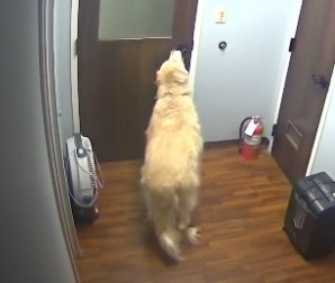 WJLA
General the Great Pyrenees opened several doors to escape from a Virginia kennel where he was being boarded.

Apparently, General really wanted to go home. Surveillance video from the kennel where he was staying in Virginia while his family was vacationing shows the clever Great Pyrenees using his nose and mouth to open several doors at the Aquia-Garrisonville Animal Hospital at 4 a.m. on Monday. "He's a little Houdini," owner Travis Campbell said. "When it comes to doors, he can get a lot of doors open." Thankfully, General was found relaxing in a nearby neighbor’s yard, and the kennel was notified. By last night, the 10-year-old dog was back at the kennel and seemed to be in good spirits after the adventure. His family of eight was relieved he was found safe. — Watch it at Washington’s WJLA

The United States Post Service released its annual ranking of the cities with the highest number of dog bites for its workers. Los Angeles topped the list, followed by Houston and Cleveland. But the numbers also showed a big jump in the total number of attacks. In 2016, mail carriers reported 6,755 dog bites or attacks. That’s an increase of 206 incidents in one year, and the highest total number in three decades. Part of the reason may be that there are more postal workers on the road to deliver packages bought online. The release of the numbers coincides with Dog Bite Prevention Week. — Read it at the Washington Post

Thanks to several penguin pairs, four endangered African penguin chicks hatched at the Toronto Zoo on February 12, 15, 27 and March 4, respectively. The first two eggs were laid by a new pair, but when they didn’t do well with incubating their eggs, they were raised by surrogate penguin parents. Another new pair, whose offspring were considered genetically valuable, had two eggs. One was given to an experienced pair to raise, and the new parents successfully incubated the second. Three of the four chicks are female. The zoo says it’s glad the new arrivals have brought “a little more girl power” to their penguin colony, because the African penguin population in North American zoos is predominantly male. — Read it at the Toronto Zoo’s Facebook 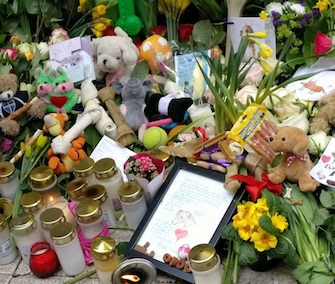 Facebook / Emma Cunningham
A memorial to a dog who was among those killed in a Stockholm attack quickly grew over the weekend.

A rescue dog who was adopted in Dublin and moved to Stockholm, Sweden, with his owners was among the victims when a truck killed four people after ramming into them on Friday night. Markus Krantz and his girlfriend, who live nearby, visited the scene of the attack on Saturday and noticed the dog who lost his life, Iggy, hadn’t yet been recognized there. They returned with a small memorial to Iggy: dog treats, candles and a collar that had belonged to their own dog, who passed away last year. They later returned again to leave a message on behalf of Dogs Aid Dublin, the group Iggy was adopted from in 2012. The touching memorial has now grown to include dog drawings, bones and toys in memory of Iggy. “[Iggy’s family] loved him so much and gave him the best life imaginable. His family would like privacy at this sad and traumatic time,” Dogs Aid posted on Facebook on Sunday. — Read it at BBC News

Allergic Admirer Has a Message for Shelter Cat

A cat with special needs is getting some welcome attention at the Oregon Humane Society. Simba, a beautiful orange tabby who is diabetic, is making news because he has an “allergic admirer,” who wrote him a love note last week. “I am writing to you on behalf of my sister who saw a story about you in a local newspaper … she wanted me to tell you that she thinks you are the HANDSOMEST cat she has ever seen,” the note reads. “When she read you are diabetic, she wished so much that she could give you a home because she too is diabetic. Unfortunately she is very allergic to cats, so she can’t have a kitty of her own, but she wanted me to let you know that she is your admirer from afar.” The 11-year-old cat’s fans and the shelter staff hope that the attention will help him find a forever home. — Read it at People Pets