April 4, 2017: We've scoured the Web to find the best and most compelling animal stories, videos and photos. And it's all right here. 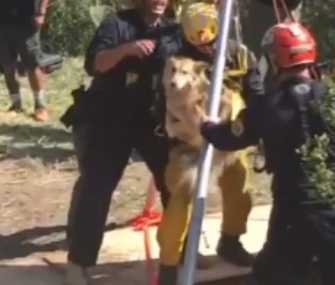 ABC 7
Firefighters used a rope system to pull Lucy safely from a 30-foot well near Malibu.

Los Angeles County firefighters spent four hours safely pulling a dog named Lucy out of a 30-foot well she fell into while hiking with her owners off a dirt trail near Malibu on Sunday. The space Lucy was trapped in at the bottom was only 2 feet wide. The county’s Urban Search & Rescue team set up a rope system so they could lower a firefighter down to get Lucy and bring her back up. The firefighters said the pup was in good spirits and is “doing great” after a trip to the veterinarian, according to an update on the department’s Facebook. They’re reminding owners to keep their dogs on a leash. — Watch it at Los Angeles’ ABC 7

A sweet video captures the emotional reunion of 11-year-old Lennox Goebel and his neighbor’s dog. Goebel lives in Nashville, Tennessee, and was best buddies with the dog, Bogart. But they were separated for a year while the dog’s owner, a musician, was on tour. Bogart had spent the year in California with his owner’s mom. Lennox has a dog of his own, a Shih Tzu mix named Happy, and while he loves his dog, he says Bogart is his “best dog friend.” Bogart returned on Saturday, and his owner surprised Lennox. The boy’s mom, Ellen Goebel, said Lennox prayed for Bogart every night while he was gone, and he’s “over the moon” to have his buddy back. — Read it at ABC News

A fluffy Humboldt penguin chick hatched at Seattle’s Woodland Park Zoo on March 17. The chick’s parents, 9-year-old dad Mateo and 4-year-old mom Mini, have each raised chicks with other mates, but this is their first offspring together. The chick is the 60th Humboldt penguin to hatch at the zoo. They concluded a naming contest on Monday but haven’t yet announced whether the baby bird’s name will be Sesenta (which means 60); Diamante (the diamond signifies the 60th anniversary) or Amor (which means love). — See photos at Zooborns 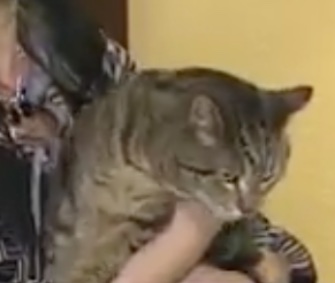 Global News
BooBoo, who's now 6, was reunited with his family on Friday after being missing for four years.

It was four years ago when BooBoo, who was then 2 years old, disappeared from her home in Watsonville, California. Owner Ashley Aleman, 21, and her family feared they’d never see the sweet kitty again, but in March, they got a call saying she’d been found — 2,000 miles away in Ontario, Canada. Her family was tracked down thanks to a microchip. Because no one in the family has a passport, the Guelph Humane Society brought BooBoo to nearby Buffalo, New York, where Ashley’s mom, Olga Chmelicek, was waiting to pick up the cat her daughters had adopted when she was a stray kitten. They were reunited on Friday, and flew back to California together, reported Canada’s Global News. Chmelicek said she was “shocked” to be holding BooBoo again and had advice for other pet owners: “Chip your animals! Chip, chip, chip!” — Read it at People Pets

Usually, it’s Tian Tian’s kids who get all the attention. (His 3-year-old daughter, Bao Bao, was recently in the news with her move to China.) This week, though, the National Zoo’s 20-year-old panda dad Tian Tian is making headlines with a video clip of his daring moves in a tree in his enclosure. The crowd can be heard gasping as he hanging upside down, but his keepers weren’t concerned. “‪#TianTian‪ versus tree. We think Tian Tian—with his adept climbing skills — wins this one,” the zoo tweeted with the video on Friday. — Watch it from the National Zoo via Twitter