Dec. 4, 2012: We've scoured the Web to find the best and most compelling animal stories, videos and photos. And it's all right here. 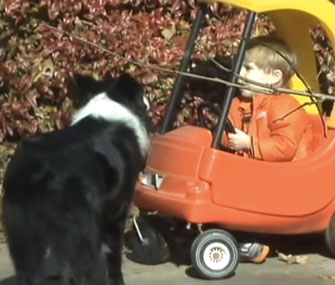 CNN
Ashepoo, an Australian Shepherd, stayed by Peyton Myrick's side while he was missing in the woods.

Ashepoo, an Australian Shepherd, never leaves 2-year-old Peyton Myrick’s side. So, when the toddler wandered off into the woods in South Carolina last week while his grandfather was taking care of him, it was the loyal dog who saved him. Hundreds of people helped Peyton’s terrified family search for the boy for four hours. At about 8:30 p.m., when it had become dark and cold, neighbors combing the area spotted Ashepoo, who led them behind a barn — and straight to the little boy, who was safe and asleep on his jacket. Ashepoo had stayed by the boy’s side the whole time. "If a dog can be a hero, that dog's a hero," said Peyton’s father, Rich Myrick. — Watch it at CNN

A Russian zoo was looking for a tiger to be a surrogate to a litter of three-week-old cubs whose mom had abandoned them. Instead, they found Tallim, a White Swiss Shepherd. The cubs, two boys and a girl, weren’t into the idea at first, showing their claws and hissing at the dog. But the trio came around to Tallim, who was "lavishing her new brood with attention and nudging them playfully." — Read it at Yahoo News

Researchers from the University of Veterinary Medicine in Vienna have discovered that there are subtle changes in the color of the stripes sported by male and female zebrafish when they are trying to woo a mate. Male zebrafish that looked more colorful also engaged in more courtship than other males, found the study, which was published in the journal Ethology. — Read it at Live Science 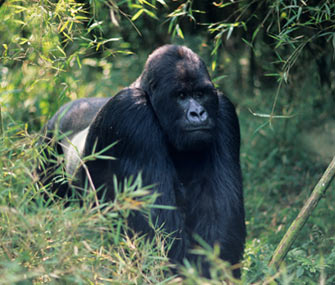 The great apes are still at risk, but there is good news for mountain gorillas: their population has increased to 880, up by about 100 since 2006, according to the Wildlife Conservation Society. Researchers think the increase is due in part to improved census methods at Bwindi Impenetrable National Park in Uganda, as well as collaborative conservation efforts. "The latest census of mountain gorillas in Bwindi (Uganda) provides the conservation community with much needed good news," said Liz Macfie, Gorilla Coordinator for the WCS. — Read it at Discovery News

At less than a week old, a 300-pound female Asian elephant born at the Oregon Zoo is already described as a “spitfire” by her keepers. "The calf is beautiful, healthy, tall and very vigorous," said Kim Smith, the zoo’s director. "As soon as she hit the ground — before she was even out of the amniotic sac — she was wiggling. And she's vocalizing loudly … it looks like she's going to be a real pistol." The public now has the chance to choose from among five names for the calf: Jaidee, Sirikit, Rakhi, Lily or Siddhi, in an online poll. The winning name will be announced on Monday. — See photos at the Oregon Zoo