Feb. 8, 2013: We've scoured the Web to find the best and most compelling animal stories, videos and photos. And it's all right here. 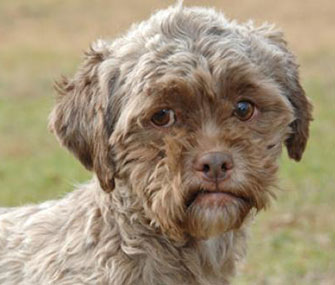 Petfinder
Tonik, famous for his human-like face, is up for adoption.

A Poodle-Shih Tzu mix who’s up for adoption after being saved by an Indiana animal welfare group has become an Internet sensation. According to his Petfinder profile, Tonik was rescued from a Kentucky kill shelter by Homeward Bound, and is a “very sweet boy” who “will need a home with lots of patience & good energy.” But it’s the photo with his listing — with what many people see as a human-like expression on his face and look in eyes — that’s made the 2-year-old dog instantly famous. — Read it at Time

Cromwell, who was nominated for an Oscar for his role in the 1995 movie Babe, was arrested Thursday after interrupting a Board of Regents meeting at the University of Wisconsin, where he accused the medical school of abusing cats in their research. The actor was with a PETA staff member at the time, and the group posted a video on YouTube of Cromwell at the meeting, where he can be heard saying, “This is not science! This is torture! And it is criminal!" — Read it at Today

Wisdom, a 62-year-old Laysan albatross, made headlines two years ago when she survived the aftermath of the devastating Japanese earthquake and tsunami. Now, she’s the mom of another healthy hatchling. The bird was tagged by a U.S. Geological Survey researcher in 1956, and has lived nearly twice as long as the average bird of her species. Officials estimate Wisdom has hatched about 35 chicks in her lifetime. “To know that she can still successfully raise young at age 60-plus, that is beyond words,” said USGS bird banding program chief Bruce Peterjohn. — Read it at Yahoo 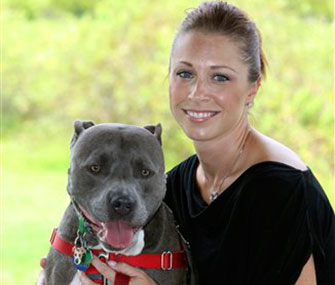 Last year, major league pitcher Mark Buehrle signed with the Miami Marlins, but had to live outside of Miami-Dade County in Florida because one of his family’s four beloved dogs was a Pit Bull mix. While living in South Florida, Slater, who’s training to be a therapy dog, quickly became the face of a movement to lift the decades old ban, but voters decided to keep it in place. Now, Buehrle has been traded to Toronto — another place with a Pit Bull ban. This time his wife, Jamie, and young children will stay behind so they can keep Slater. "A lot of people have said, 'We'll just keep Slater for you,'" Jamie says. "To me, that would be like if we moved somewhere that only allowed boys. I wouldn't leave my daughter behind … He's our dog. That wasn't really an option." — Read it at ESPN

Maybe they’re squatting. Work on a 304-unit apartment complex in Seattle came to an unexpected stop this week when workers discovered that two raccoons had decided to make a home in the cab of their crane, towering 150 feet above the city. Experts are now trying to humanely catch the animals. — Read it at the Huffington Post