April 16, 2013: We've scoured the Web to find the best and most compelling animal stories, videos and photos. And it's all right here. 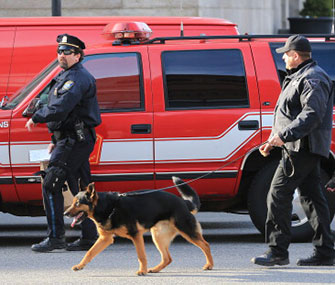 Boston Globe / Getty Images
A dog helps police in Boston with their investigation after two explosions went off near the finish line of the Boston Marathon on Monday.

Bomb-sniffing dogs have been working tirelessly in Boston, where two explosions killed three people and injured more than 130 near the finish line of the 117th running of the Boston Marathon. News reports and photos show that K9s assisted officers with providing security before the race and then in the hours after the tragic explosions, as calls about suspicious packages poured in from vigilant and frightened citizens and visitors who were in town for the race. Dogs also helped officers in other cities around the country as they tightened their security. Now, the Lutheran Church Charities in Chicago, which made headlines when their K9 Comfort Dogs helped in the aftermath of the Newtown, Conn., shootings, is preparing to send a team of dogs to the Boston area “as soon as the situation allows.” — Get the latest news on the situation at Boston.com and follow the K9 Comfort Dogs on Facebook

A new study finds that sharks tend to stay closer to the surface, where the water is warmer, during the winter, and headed into deeper waters when the temperatures began to rise in the spring. The 3-year study of mostly female grey reef sharks east of the Philippines also found that their behavior changed with the lunar cycle, diving deeper with a full moon but staying in more shallow waters during the new moon. The sharks would go to their greatest depths when the sun broke through the water at midday. Researchers from the University of Western Australia said these tendencies may help the sharks save energy, find food and avoid bigger sharks. The study was published in the journal PLOS ONE. — Read it at Live Science

River and Smokey are brothers and best friends. Raised together since they were puppies, the two German Shepherds are each other’s eyes and ears. Smokey lost his sight about two years ago, and River lost his hearing at about the same time. Now, they help each other get around, but they’re in need of a home — together. Their previous owner had to give them up when he was forced to sell his house, and the two are now in foster care with a family in Bloomington, Minn., but need a home that’s quieter and doesn’t have as many stairs. Still, their foster family pledges to keep them until the perfect home is found. “They will not leave here without each other,” said foster mom, Tara Boals. “If they have to stay here forever … then that’s what’s gonna happen. I want them to go somewhere where they can be together.” — Watch it at USA Today 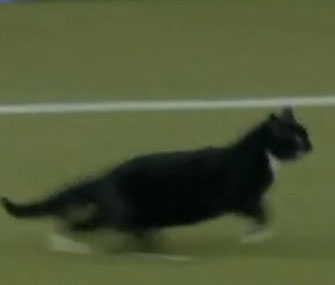 Telegraph
A cat ran across a soccer field during a Dutch match on Saturday.

The crowds went wild as a fast-moving kitty ran all over the soccer field during a match in the Netherlands on Saturday. Referees stopped the game while they waited for the cat to exit the field, and he was eventually caught by a manager at the stadium and taken out of the game. But the black cat might have brought some bad luck for the home team, who lost 2-0 after his appearance. — Watch it at the U.K.’s Telegraph

Mom Sophia is protective of her 2-week-old baby, Anvil. But when the colobus monkey’s Aunt Thumbelina is allowed to “babysit,” she takes great pride in showing her off to adoring visitors at the London Zoo. “Mum Sophia is very protective over tiny Anvil, who is only about eight inches tall, but she does let aunty Thumbelina have cuddles with her,” said zookeeper Alison Parbles. The zoo says Sophia spends most of the day holding on tightly to her newborn. — Read it from the ZSL London Zoo