Feb. 21, 2014: We've scoured the Web to find the best and most compelling animal stories, videos and photos. And it's all right here. 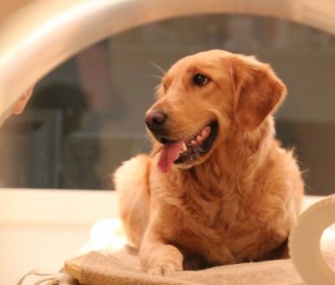 Eniko Kubinyi
A Golden Retriever waits to undergo an fMRI for a study in Hungary.

A team of researchers in Budapest, Hungary, trained 11 Golden Retrievers and Border Collies to lay motionless for eight minutes at a time to undergo fMRI scans. “They just love it; they can’t wait to be the next,” said study researcher Attila Andics of MTA-ELTE Comparative Ethology Research Group. The dogs listened to 300 vocal sounds while the scientists investigated the region of their brains that reacted to them, and compared the results to scans of 22 humans. They found that the humans and dogs used the same “voice area” in their brains to process sounds, which may help them to understand each other’s emotions. "The really striking thing about the emotional result is that the human brain responds to dog emotions the same way it responds to human emotions, and that the dog brain, similarly, responds to human emotions the same way it responds to dog emotions," said Andics. The presence of the voice area suggests this region of human and dog brains existed in a common ancestor that lived as long as 100 millions ago. The study was published in the journal Current Biology. — Read it at the Live Science

Doctors at the Colorado State University Veterinary Teaching Hospital in Fort Collins had one very unusual — and very large — patient on Tuesday. Marley, a 7-year-old, 300-pound female grizzly bear, underwent surgery to repair her two broken front legs. The bear had been rescued about a month ago from a roadside attraction in Georgia. She and 17 other bears now have a new home at the Wild Animal Sanctuary in Keenesburg, Colo. Now that she’s gotten treatment, Marley could live for another 20 years, said the sanctuary’s Rebecca Miceli. — Read it at ABC News

Earlier this week, passengers on a train in the northeastern region of Goalpara, India, witnessed a wild baby elephant who was separated from his herd slipping down a muddy railway and getting trapped in a ditch. Many of them asked the train’s conductor to stop so they could get out and help the calf. More than a dozen of the passengers comforted the calf by feeding it vegetation while they waited for a forest official to arrive and safely pull the animal from the ravine. — See photos at the Huffington Post 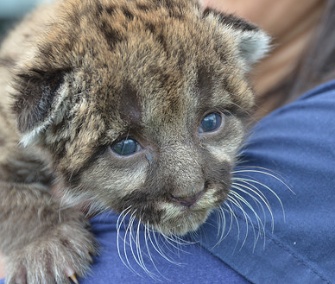 Carli Segelson, FWC
The Florida panther kitten was only about 1 pound when he was found. He's pictured here at 2 weeks old.

This week has brought news of the rescues of three different endangered species in Florida. On Tuesday, a team from SeaWorld Orlando came to the aid of a male manatee near Ormond Beach who was suffering from cold stress, and is now getting around-the-clock care from the facility. On Thursday, Florida Fish and Wildlife officials shared news of two more recent rescues. They saved a massive loggerhead sea turtle after a concerned boater saw it floating abnormally in the Intracoastal Waterway in Martin County. They’re hopeful that the reptile can be released after a successful rehabilitation. The FWC also announced on Thursday that in January, its biologists had saved a 1-week-old, 1-pound male Florida panther kitten who they discovered while conducting research. Because he was so young at the time of his rescue, the kitten couldn’t learn survival skills from his mom, and can’t be released into the wild. He’s being rehabilitated at Tampa’s Lowry Park Zoo.

Wildlife officials also came to the aid of an endangered 4-year-old male right whale off the coast of Georgia this week. They cut away more than 280 feet of commercial fishing line being dragged by the whale, although some of the heavy rope had to be left tangled in the animal’s mouth. Experts believe there are only about 450 of the whales left in the wild, and commercial fishing gear and ship collisions are their biggest threats. "We feel like what we did gives the whale a fighting chance to shed the remainder of the rope on its own," said Clay Georgia, a marine mammal biologist for the Georgia Department of Natural Resources. — Read it from the AP via Yahoo