Dec. 6, 2012: We've scoured the Web to find the best and most compelling animal stories, videos and photos. And it's all right here. 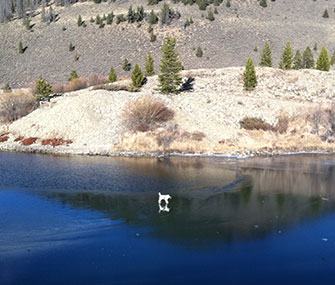 While the Vargas family was hiking near Breckenridge, Colo., over Thanksgiving weekend, their dog, Jonah, saw something that caught his eye: a group of ducks. He escaped from his collar and chased them into the middle of a partially frozen dredging pond before he stopped cold. “I think he looked down and realized where he was,” said owner Rod Vargas. Knowing that the very thin ice wouldn’t hold their weight, the family did the right thing, and called for help. An animal control officer with special equipment — including a dry suit to protect him from the freezing water — waded into the icy pond until he was able to get the scared dog to slide back toward shore, where he was reunited with his relieved family. Jonah didn’t suffer any injuries in the incident. “We told all our friends” about the rescue, said Vargas in a press release issued Tuesday by the Summit County, Colo., sheriff’s office. “It was so touching what they did." — Read it at ABC News

There are benefits to being the life of the party— even for gorillas.A new studypublished in the journalProceedings of the Royal Society Bfound that extroverted apes outlive their shy counterparts. Researchers gauged the temperament of 298 gorillasin zoos and sanctuaries in North America, using methods adapted from studies of human personality, and followed them for 18 years. Much like human studies have found, the researchers discovered that the more sociable, playful and curious the gorilla, the longer it was likely to live.— Read it at Live Science

A 2-inch darter native to Tennessee with bright orange, blue and green scales has been officially named Etheostoma obama, to honor the president for his approach to ecological issues. "We chose President Obama for his environmental leadership … and because he is one of our first leaders to approach conservation and environmental protection from a more global vision," the researchers said. The scientists also named darters for former Presidents Theodore Roosevelt, Bill Clinton and Jimmy Carter, as well as for former Vice President Al Gore, because of their conservation efforts. — Read it at the Huffington Post 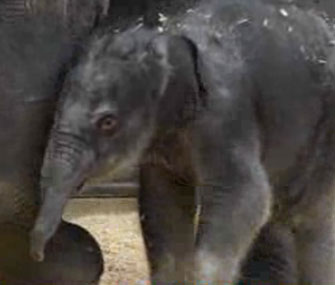 Today
The Oregon Zoo says its baby elephant will stay there.

Baby Elephant to Stay at Zoo

The celebration around the birth of a baby Asian elephant at the Oregon Zoo, which we told you about on Tuesday, was diluted this week by newspaper investigations that found that the calf was actually owned by a controversial California elephant rental company called Have Trunk Will Travel. The company owns the baby’s father, and a breeding contract states that the company takes ownership of their elephant’s second, fourth and sixth calves. Born to mom Rose-Tu last week, this is the pair’s second offspring. But both the zoo and the company say that the baby will stay with her mom at the zoo. “It was never in question for this calf … (She) was always going to live here,” said Oregon Zoo director Kim Smith. "Have Trunk Will Travel has no intention and has never had any intention of coming to take Rose-Tu's calf," company co-owner Kari Johnson told The Associated Press. — Watch it at Today

You’ve likely heard that a pair of Australian radio DJs made headlines on Wednesday when they called King Edward VII hospital, where pregnant Duchess Catherine is staying, posing as Queen Elizabeth II and Prince Charles — and managed to speak to a nurse in Kate’s ward. What you may not have heard was that the queen’s famed Corgis were also impersonated in the call. “O.K., well I’m just feeding my little Corgis, then,” the “queen” says, while a third impersonator barks in the background. “When are you going to walk those bloody Corgis?” she says to “Charles.” “Mumsy, I’ll go take the dogs outside,” he responds. The DJs later apologized for their stunt, and Kate checked out of the hospital today. — Hear it at the U.K.’s Mirror