Jan. 15, 2014: We've scoured the Web to find the best and most compelling animal stories, videos and photos. And it's all right here. 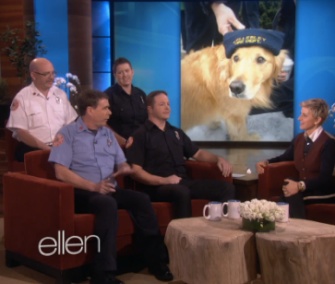 Ellen TV
Ellen DeGeneres thanking a group of Boston-area firefighters for saving a Golden Retriever who fell through ice.

Firefighters from Wellesley, Mass., were celebrating at their annual holiday party three days before Christmas when they got a call saying that a Golden Retriever had fallen through the ice into the Charles River. Crosby was chasing a squirrel when the ice gave out. Two firefighters wearing protective suits ended up in the frigid river themselves while they worked to save the 5-year-old dog, but they calmly hoisted her out and got back to shore safely themselves. “Crosby’s a big part of our family and they didn’t hesitate one second and they went right in there for her,” Crosby’s owner told Ellen. On Tuesday, the four heroes who took part in the rescue appeared on Ellen DeGeneres’ talk show to tell their story — and get a special thank you from the animal-loving comedian. She gave each of the firefighters — and Crosby — special Ellen life vests. And each of Crosby’s heroes got a little something to help them warm up: a cruise to the Caribbean. — Watch it from Ellen

Christian Johnson and his daughter did everything they could think of to try to get a cat down from a neighborhood tree in Chandler, Ariz. He was out of their reach, and they had a hard time finding non-emergency group to help. Finally, three days after the Johnsons first heard the stuck kitty’s meows, a tree-trimming crew working in the neighborhood offered to help. They used their bucket truck to reach the cat, who was wedged between two branches. One of the workers was able to free the feline and bring him safely back to the ground. There, the Johnsons took him home to feed him, and made an appointment to see the vet. They’ll take care of him, at least for now. — Read it at Arizona’s ABC 15

A healthy male cougar cub was born to 14-year-old Winnie at Zoo Salzburg in Austria on Christmas Eve. The zoo reports that Winnie has been a devoted mom to the little guy. Cougar cubs typically weigh less than a pound when they’re born, and have a spotted coat and bright blue eyes. When they’re about 6 months old, their eye color changes and their coats turn to a solid color. The color ranges from silver-gray to reddish-brown, depending on where the cats live. — See photos at Zooborns 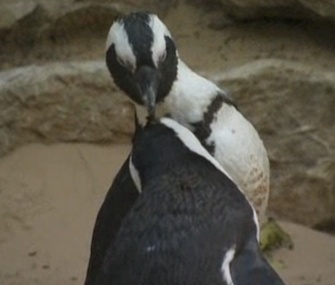 NBC News
An Israeli zoo says it has a lesbian penguin couple building a nest together.

Female Penguins Pair Up at Zoo

Penguins Chupchikoni and Suki have been a couple at the Ramat Gan Zoological Center in Israel for about two years. They live together and appear to be preparing their nest for a chick. But a recent blood test revealed a surprise: the birds are both females. Although same-sex relationships aren’t unheard of for penguins, a female pair is more unusual than a male pair, like the famed Buddy and Pedro at the Toronto Zoo. “They don't have their own egg, but they’re doing everything like a couple of male and female,” said zookeeper Mor Porat. “I think it’s the first time we’ve actually seen two females. It’s actually very exciting.” Porat said visitors have been delighted to hear about the unusual relationship. — Watch it at NBC News

The creator of Family Guy told reporters on Monday that he and his writers were shocked by their fans’ reaction when they (temporarily) killed off the Griffins’ talking dog, Brian, last year. “We were all very surprised, in a good way, that people still cared enough about that character to be that angry,” MacFarlane said. “We thought it would create a little bit of a stir, but the rage wasn’t something we counted on.” Luckily, Brian was revived a few episodes later, after Stewie went back in his time machine. And it doesn’t sound like the lovable dog will be doing anywhere any time soon. “Would I do it again? No. We already did it,” MacFarlane said. — Read it at Entertainment Weekly