March 16, 2017: We've scoured the Web to find the best and most compelling animal stories, videos and photos. And it's all right here. 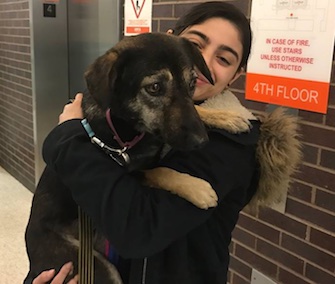 Animal Haven / Facebook
Pandy is safe and waiting for an adopter at Animal Haven after a jaunt through the storm in New York on Tuesday.

Pandy was rescued for the second time on Tuesday afternoon. The 5-year-old Terrier has been staying at New York’s Animal Haven shelter after she was saved from the dog meat trade in Thailand. But the pooch got spooked during a walk with a volunteer on the streets of Manhattan in blizzard conditions on Tuesday, and ran 40 blocks across town. About an hour later, she was spotted by police officers near the entrance to the Lincoln Tunnel, which leads to New Jersey. They scooped up the exhausted and freezing pup and brought her to the ASCPA, where her microchip helped identify her. Pandy is now safe, warm and loved back at Animal Haven, where she’s waiting to find her forever family. “She’s tired but she’s the sweet girl she always is,” said the shelter’s executive director, Tiffany Lacey. “She’s shy and needs a patient, loving adopter.” — Read it at the New York Post

New research using aerial and ground surveys, tagging and camera images over several breeding seasons finds that the number of Adelie penguins in East Antarctica is 5.9 million — not 3.6 million, as previously thought. Previous population estimates only took breeding pairs into account. “Non-breeding birds are harder to count because they are out foraging at sea, rather than nesting in colonies on land,” said Australian Antarctic Division seabird ecologist Louise Emmerson. “However, our study in East Antarctica has shown that non-breeding Adelie penguins may be as, or more, abundant than the breeders.” On the basis of this number, the scientists estimate the global Adelie penguin population to be 14 to 16 million. — Read it at Yahoo

Koalas usually rely on eucalyptus leaves for nourishment and moisture, but scientists say climate change is forcing the parched marsupials to leave their trees to get water at drinking stations. When the desperate animals scramble down from their trees and stand at the water stations, they run the risk of an attack from predators. Camera footage showed the koalas drinking water for more than 10 minutes even during the winter months last year. They expect that they drank more during the summer season, which runs from December to February, when the country’s east coast had a record-hot summer. — Read it at Reuters 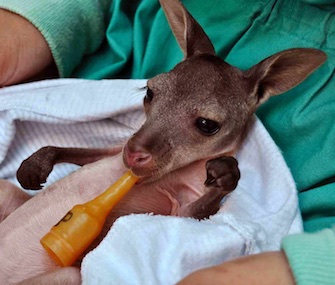 Oakland Zoo
A 5-month-old orphaned wallroo is being bottle fed and kept in a makeshift pouch at the Oakland Zoo.

Keepers at the Oakland Zoo are caring for a 5-month-old wallaroo around the clock after his 3-year-old mom died of an infection earlier this month. The joey, who hasn’t yet been named, is bottle fed seven times a day with a special formula made in Australia called wombaroo. The baby is being kept in a makeshift pouch and he gets daily physical exams. They hope to have him leave his artificial pouch and join the rest of the zoo’s wallaroos in about three months, when he’ll be at the age that wallroos typically leave their mom’s pouch. — Read it at California’s Mercury News

Buttons, a 20-year-old black and white cat suffering from tapeworms, was taken in by the Saving Sage Animal Rescue Foundation in Florida after they heard about his plight. The rescue was outraged that Buttons was surrendered in his old age, and so were their Facebook followers. Immediately after they shared his story on social media, a woman named Jennifer applied to adopt him. Buttons is now getting IV fluids in an animal hospital, and he’ll go home with Jennifer on Monday. “I am hoping this senior lives out his life getting the love and attention he so much deserves and hasn’t gotten up until this point,” says the rescue group’s vice president, Kathy Bieniek. — Read it at People Pets