Sept. 2, 2016: We've scoured the Web to find the best and most compelling animal stories, videos and photos. And it's all right here. 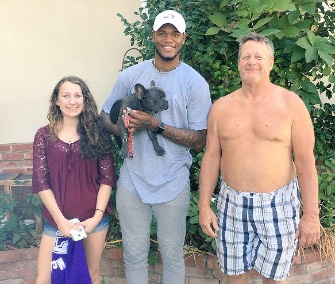 Twitter / BenMcLemore
NBA player Ben McLemore poses with Mat Davis and his daughter, who helped him find his lost puppy.

When Sacramento Kings guard Ben McLemore’s puppy went missing on Monday, he turned to his Twitter followers for help — and it worked. By Wednesday, the NBA player said he’d been reunited with the 10-month-old blue-gray French Bulldog named Rolex. “Special thank you to ‪@matdavis916 for leading me to find him, and Jon who cared after Rolex until we picked him up,” McLemore tweeted on Wednesday night. Davis’ daughter had brought the pup into his veterinary clinic. Both Davises posed with McLemore and Rolex in a photo the player shared. “Power of the Internet is amazing. ‪#MyPupIsSafeAndSound ‪#LoveMyFans ‪#FrenchieNation,” he tweeted later that night. — Read it at Sacramento’s KCRA

Dogs are more cautious than their wolf cousins, a new study finds. When given the choice between a mere food pellet and a 50/50 chance of getting either a piece of meat or an inedible stone, the wolves almost always chose the risky option with the chance of getting the tasty meat payoff, while dogs weren’t as willing to take the chance. Wolves took the risk in 80 percent of their trials, while dogs did so 58 percent of the time. “This difference, which seems to be innate, is consistent with the hypothesis that risk preference evolves as a function of ecology,” said lead author Sarah Marshall-Pescini of the Veterinary University of Vienna and the Wolf Science Centre in Austria. The study was published in Frontiers in Psychology. — Read it at Phys.org

Hotter summers due to climate change are threatening the habitats of the cute little American pika, which is a relative of the rabbit. Pikas live in rocky slopes known as taluses across mountain ranges in the West. A new study from the U.S. Geological Survey finds that entire populations of pikas are disappearing as their habitats become hotter and drier in summer and harsher in the winter. The study was published in the Journal of Mammalogy. — Read it at Live Science 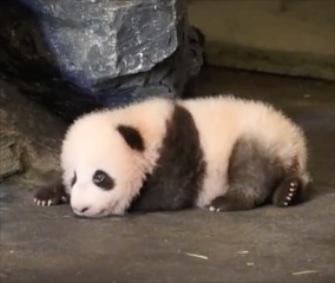 A chubby baby panda who’s been affectionately known as Baby P since he was born at a Belgium zoo struggles to get his feet under him in a sweet new video that’s gone viral. The zoo, Pairi Daiza, is now asking for the public’s help in naming the 3-month-old cub. The five choices in a public poll include Tian Bao (Heaven’s Treasure), Xing Hao (Good Star), Ou Xing (Star of Europe), Hua Li (China and Belgium), and An Tuan (Peace United). The zoo plans to have the keepers who know Baby P best choose from among the top three selections make by the public. — Read it at Today

A Hungarian man who became lost in the mountains near Gimmelwald, Switzerland, says a friendly local cat guided him back to the right path. The walker described his experience recently on Reddit, and linked to a 2013 video of the encounter on YouTube. He said the cat was wandering around and found him while he was resting his sprained ankle. “Then she was walking and kept looking at me to follow [and] led me straight to the path that would take me back down to the valley,” he wrote. Many local walkers have said that they have seen the same cat, who’s believed to belong to a couple who owns a nearby hostel. — Read it at the U.K.’s Independent