May 21, 2013: We've scoured the Web to find the best and most compelling animal stories, videos and photos. And it's all right here. 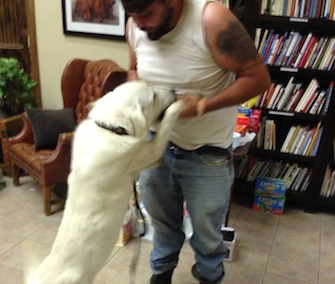 Animal Resource Center / Facebook
Nova, who was lost during Monday's tornado, is happily reunited with his owner.

At least 51 people were killed in the massive tornado that struck Moore, Okla., on Monday afternoon, wiping out entire neighborhoods and two elementary schools. Although the storm missed areas with larger ranches, reports the LA Times, smaller ranches like the Orr Family Farm were devastated. Amid the destruction are stories of relief, like a Moore woman who was headed to work but turned around to ride out the storm in her bathtub with her dog. As the victims try to pick up the pieces, many groups are jumping in to care for lost pets and try to reunite them with their owners. Below is a roundup of some existing organizations that are helping, as well as some Facebook groups that have sprung up to help.

Meanwhile, ABC News has a listing of how to help tornado victims, and K-9 Parish Comfort Dogs is preparing a team to respond to the crisis when it’s safe to do so.

Check back with Vetstreet for more coverage of how animals are faring after the tornado.

Why Did Penguins Lose Ability to Fly?

A new study published in the Proceedings of the National Academy of Sciencesexplains that by trading in their ability to fly millions of years ago, penguins became much better divers. "Once penguins gave up flight, changes to wing structure and overall body size and shape probably followed rapidly because flying no longer placed constraints to body form," said co-author Robert Ricklefs, a biology professor at the University of Missouri at St. Louis. — Read it at Discovery News

Research by the University of Pennsylvania shows evidence that puppies purchased from pet stores are more likely to show behavioral problems later in their lives. Dogs who came from pet stores scored worse on 12 of the 14 behavioral variables that were measured, and didn’t score better on any of the measures. "I wasn't expecting the effects to be so across-the-board bad," said James Serpell of the Penn School of Veterinary Medicine, and one of the study's co-authors. Among the poor behaviors was the tendency to show aggression and an increased risk for running away. — Read it at Paw Nation 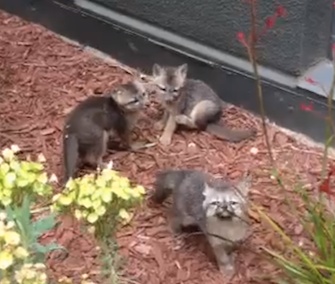 Today
Facebook employees have been enchanted with a resident fox family.

An adorable family of California gray foxes has set up its home on Facebook’s Menlo Park, Calif., campus. Employees have set up a Facebook page for the mom and three kits, where they share adorable photos and videos of the clan. “Share your celebrity sightings here!” reads the page’s description. “Please honor the MPK Fox — no chasing or feeding — just mutual respect.” They started sharing photos of the babies in late April, when they got the ultimate fan: Facebook founder Mark Zuckerberg. — See photos at Today

Wildlife photographer Brad Josephs placed his GoPro camera on a rock in a stream to capture bear footage in Alaska. But the shot he got wasn’t exactly what he was expecting. A grizzly bear cub came up to play with and bite the camera, creating a moment that’s gone viral on YouTube. “I was mostly going for just the bears just walking by or catching fish … what they mostly do is just ignore those little cameras,” Josephs said. The photographer is just grateful that the camera survived the cub’s investigation. (Warning: the inside of the cub’s mouth is not exactly adorable.) — Watch it at CNN