Oct. 25, 2012: We've scoured the Web to find the best and most compelling animal stories, videos and photos. And it's all right here. 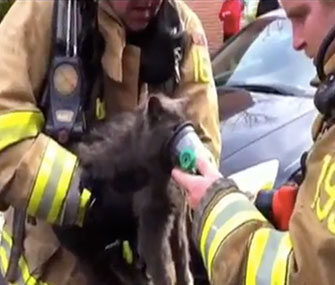 Onlookers cheered as firefighters carried Tiki Bear, a 17-year-old cat, out of her historic Portsmouth, N.H. home after a devastating blaze on Tuesday. Firefighters used an oxygen mask to get the cat breathing again. “We’ve had her since she was a baby and have spent a lot of time with her. She’s a good kitty,” said Tiki Bear’s owner, Dave Adams, who was grateful the firefighters were able to save his family’s pet. Tiki Bear was taken to a veterinary clinic, where doctors said late Wednesday that she was improving and had taken her first bites of food, according to a Facebook page that her family has set up. — Read it at People Pets and watch video on YouTube

Plus: Authorities in Burlington, Mass. got an unusual rescue call this week: a 7-year-old chocolate Labrador was stuck on a top of a house. While his family wasn’t home, the dog had pushed out a screen in a second floor window and walked out onto the roof. A driver passing by saw him, called for help, and a canine police officer carried the scared dog down a ladder to safety. — Read it at Boston’s WHDH

An ordinanceto ban pet stores from selling dogs, cats and rabbits from commercial breederswas given preliminary approval by the Los Angeles city council in a 12-2 vote. Under the law, pet stores would only be able to sell animals that come from shelters, humane societies and registered rescue groups. Animal activists praised the ban, which targets puppy mills, but pet shop owners said it was unfair. Because the council’s vote wasn’t unanimous, it must return for a second reading next week. — Read it at the LA Times

What recession? The overall economy might be sluggish, but that hasn’t stopped pet owners from spending on their furry friends. Sales of pet products and services in the U.S. are expected to total nearly $53 billion this year — a 42 percent increase since 2001, according to a report by the brokerage firm ConvergEx. — Read it at NBC News 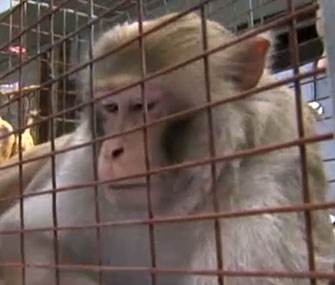 ABC News
The Mystery Monkey of Tampa Bay was captured after three years as a fugitive.

After eluding authorities for three years, the Mystery Monkey of Tampa Bay has been caught. The wild rhesus macaque has become quite a celebrity during his time on the lam, earning a mention on The Colbert Report and getting 86,000 likes on his Facebook page. Officials from the Florida Fish and Wildlife Conservation Commission wanted to capture the primate because they weren’t sure if he carried any diseases. If the monkey gets a clean bill of health, he’ll likely be moved to a local exotic animal facility until the right home can be found for him. — Read it at ABC News

The 48th annual Wildlife Photographer of the Year competition went to... the penguins. An underwater shot of Emperor penguins swimming in Antarctica’s Ross Sea by photographer Paul Nicklen, that is. Stunning images of a Sumatran tiger, a polar bear and an alligator were also winners, among others. — See the photos at National Geographic