Sept. 3, 2014: We've scoured the Web to find the best and most compelling animal stories, videos and photos. And it's all right here. 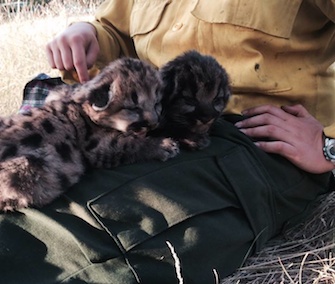 A pair of mountain lion cubs is recovering at the Montana Wildlife Center in Helena, Montana, after fire crews saved them from the Three Mile Fire at Bitterroot National Forest on Friday. The crew could hear noises coming from under a burning log where the kittens were taking shelter but had to call in a helicopter to drop 600 gallons of water so they could reach them. Once the flames around them were out, the soaked cubs, who are only 1 to 2 weeks old, came out of their hiding place. Wardens with Montana Fish, Wildlife and Parks took custody of the cubs and brought them to the rehabilitation center. Although their fur was singed, officials say they’re doing fine. No decision has been made yet on whether they can be released back into the wild. — Read it from Texas’ ABC 13

Desmond Hague, CEO of the privately owned Centerplate, which serves food at several major sports stadiums and other public facilities, resigned a week after elevator security video showing him kicking a dog was posted on YouTube. The video, which quickly went viral, sparked outrage and lead to several online petitions encouraging boycotting of facilities where Centerplate caters, including the new Levi’s Stadium in San Francisco. "The decision comes as a result of Hague's personal misconduct involving the mistreatment of an animal in his care," the company statement says. The Doberman in the video was a friend’s dog who Hague was caring for at the time. — Read it at USA Today


Study: Marmosets Can Learn From Strangers

Researchers from the University of Vienna in Austria trained two captured marmosets to get a treat out of a box by opening a lid or pulling a drawer and shot video of them doing it. They brought the same type of box to the forest in Brazil and put it on a tree branch with a laptop showing videos of the trained marmosets getting the treats out of the box. Many of the monkeys didn’t figure it out, but of the 12 who were able to open the box, 11 had watched one of the videos. It’s the first evidence of marmosets in the wild being able to learn from marmosets who aren’t part of their social group. The study was published in the journal Biology Letters. — Read it at Nature 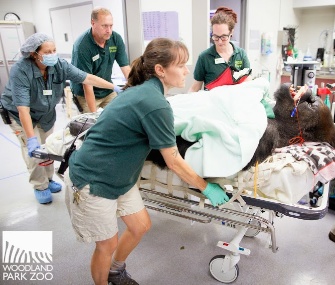 A 425-pound western lowland gorilla at Seattle’s Woodland Park Zoo is expected to make a full recovery after having surgery to relieve a complex sinus infection that wouldn’t respond to antibiotics. Vip, a silverback who’s 35, had been suffering from the infection since February and wasn’t able to breathe through his nose until last week’s 4-hour procedure. Just a day after the surgery, the swelling in Vip’s face started to go down, his appetite came back — and he got angry with one of his zookeepers, which suggested he had more energy. "It was incredible to see him back and interacting with his family,” said Dr. Greg Davis, a University of Washington associate professor who performed the surgery. — Read it at Live Science

There’s happy news to report about Suri Cruise’s dog. Days after she went missing, Cruise’s recently adopted Chihuahua mix was found safe and sound. The 1-year-old pooch escaped from a friend’s yard in Beverly Hills and wasn’t wearing a collar because she had been in the pool. Flyers were posted in the area and Suri’s mom, Katie Holmes, offered a $1,000 reward for Honey’s safe return. Honey was found with the help of Lucky Puppy Rescue and Retail, a not-for-profit pet store. Honey's microchip led her back to 8-year-old Suri and her mom. — Read it at People Pets