Sept. 28, 2015: We've scoured the Web to find the best and most compelling animal stories, videos and photos. And it's all right here. 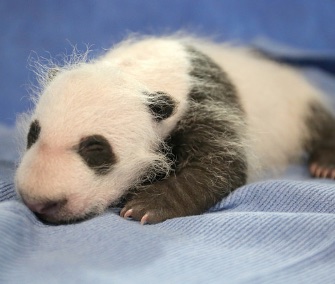 There was a big surprise from the National Zoo on Friday. When the first ladies of the U.S. and China visited Mei Xiang’s 1-month-old panda cub, they chose his name. Michelle Obama and Peng Liyuan selected the name Bei Bei, which means “precious treasure” and is pronounced Bay-Bay, for the nearly 3-pound cub. It’s considered a complement to his 2-year-old big sister, Bao Bao. U.S. zoos usually wait until panda cubs are 100 days old to name them, in keeping with an ancient Chinese tradition where parents would wait 100 days to name their children. But most Chinese parents no longer wait to name their children, and Chinese panda breeding centers don’t wait to name their cubs. The zoo decided to forego the tradition in this case to give the first ladies this honor. Bei Bei was the suggestion of panda keepers from Woolong, China. National Zoo keepers had submitted the name Ping Ping, which means “peaceful and calm.” The baby panda is “doing great,” said zoo director Dennis Kelly. “In fact, it’s bigger than our other two cubs were at this stage. A big, fat cub. That’s what we want.” — Read it at the Washington Post

After outrage emerged on social media over pictures of thousands of tourists taking selfies with sea turtles trying to nest on a beach in Costa Rica, the local government and law enforcement have stepped in to help. The government shut down four of the six entrances to the beach, and only small tour groups with special wristbands are allowed onto the beach to see the estimated 100,000 olive ridley sea turtles nesting there. — Read it at The New York Times

More than 300 cats took part in the International Cat Show in Romania over the weekend. From sleek Singapuras to giant Maine Coons and hairless Sphynx cats, the felines were judged on their beauty at the show in Bucharest on Saturday and Sunday. While dozens of cat breeds were shown, people in attendance were also encouraged to support animal shelters, and shelter cats were available for adoption. — See photos at Yahoo 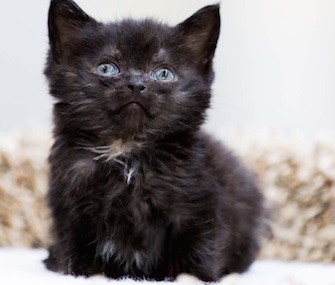 Wisconsin Humane Society
A kitten who was found by children in Wisconsin was named Miracle.

A fluffy little black kitten who’s recovering at the Wisconsin Humane Society is alive thanks to a group of children who found him in a paper bag on Sept. 7. An adult passing by called the police, who picked up the kitten and brought him to the Humane Society. The shelter named the kitten Miracle because it was amazing that he survived. Sadly, two of his siblings didn’t make it. “He is a strong-willed little kitten,” said the shelter spokeswoman Angela Speed. Now 5 weeks old, Miracle is in foster care. He won’t be ready for adoption until he’s at least 8 weeks and weighs 1.2 pounds. — Read it at Wisconsin’s Racine Journal

Cedar Wright and Alex Honnald were on the second leg of an 800-mile bike ride through the Southwest that they call Sufferfest when they found someone who was suffering even more: a ridiculously cute, abandoned puppy. They fed the pup, who they named Sufferpup, and decided to take him with them. “For me, it was like ‘thank goodness for Sufferpup,’ because when you’re just pushing yourself to your absolute limit ... it’s really heartening at the end of the day to come down and have this adorable little puppy to cuddle with,” wrote Wright said in a National Geographic’s Explorers Journal. The little puppy who looked like a teddy bear went to live with a family in Boulder, Colorado, once the pair finished their trek — and he’s now fully grown. — Read it from AKC News