Pet Scoop: Friar Dog at Monastery Gets His Own Robe, Thrilled Dog Reunited With Airman

March 9, 2017: We've scoured the Web to find the best and most compelling animal stories, videos and photos. And it's all right here. 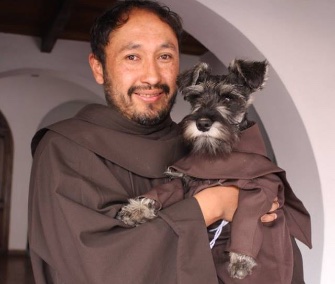 Kasper Mariusz Kapron Ofm / Facebook
Photos of a monastery dog in Bolivia sporting traditional like the monks there have gone viral.

Schnauzer Fits Right in With Monks

Carmelo, whose official name is Friar Bigoton (Friar Moustache), is an adorable Schnauzer who lives at a Roman Catholic monastery in Bolivia. The little guy has quickly gained fame this week, as photos of him dressed in the traditional brown robes like the monks he lives with have gone viral. Several news stories have reported Carmelo was adopted as a stray and wears the robes regularly, but the monk who shared his cute photos clarified the pup’s story this morning. In a new Facebook post, Kasper Mariusz Kapron Ofm (Order of Friars Minor) wrote that the dog wasn’t actually a stray and doesn’t always wear his robes. Instead, he was given to the monks as a Christmas gift when he was a puppy — and he sported his custom robe as a “prank” on their seminarians for Carnival this year. Still, it’s clear that the little guy is loved and adorable. — Read it from Kasper Mariusz Kapron Ofm via Facebook

Two True’s beaked whales were caught on camera by students during an expedition in Portugal's Azores Islands. Live sightings of the elusive whale species is extremely rare, and the video is the first recording of them in the wild. A study published Tuesday in the journal PeerJ includes the video, rare photos of a whale calf and further data collected from strandings and sightings of the True’s beaked whales. — Read it at Yahoo

A new report finds that rising temperatures and heat waves with a greater duration and intensity are posing a grave danger to songbirds in the Southwest. Songbirds that are common in the region, including the lesser goldfinch, house finch, cactus wren, Abert's towhee and the curve-billed thrasher, are facing a greater risk for death by dehydration and mass die-offs under projected conditions where temperatures increase by 7 degrees Fahrenheit during summer by the end of the century. “When it's really hot, they simply can't evaporate enough water to stay cool, so they overheat and die of heat stroke,” said co-author Blair Wolf of the University of New Mexico. “In other cases, the high rates of evaporative water loss needed to stay cool deplete their body water pools to lethal levels.” The findings were published in the Proceedings of the National Academy of Sciences. — Read it at Science Daily 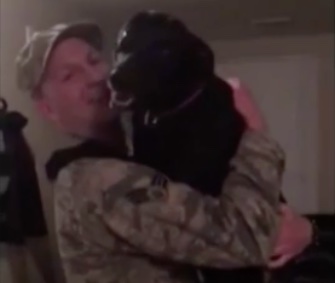 USA Today
A new video shows an excited pup being reunited with her Air Force owner.

A sweet new video captures the moment an airman with the U.S. Air Force was reunited with his ecstatic dog after a 6-month deployment. The pup doesn’t seem to know what to do first when his owner walks through the front door, racing around, whining and then jumping into his arms. She seems to only get more excited as the reality of her loved one’s return sinks in. With her tail wagging wildly, the airman picks the dog up and gets smothered in kisses. — Watch it at USA Today

The Sterling, Illinois, police department has one cute new recruit: Brinkley, a 2-month-old puppy who will serve the community as a comfort dog. The pup will help to calm crime victims, visit schools and be a goodwill ambassador for the department. Brinkley will also help combat stress and burnout among the officers on the force. “There's a lot of stress in our job,” said Officer Niki Diehl. "She'll be, you know, good for morale for us." — See photos at People Pets