March 24, 2014: We've scoured the Web to find the best and most compelling animal stories, videos and photos. And it's all right here. 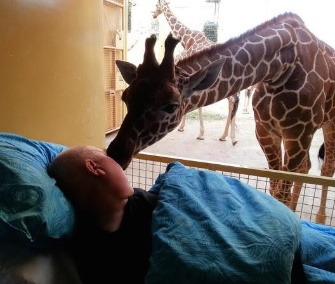 Twitter / StAmbulancewens
A giraffe at the Rotterdam Zoo in the Netherlands leans over to kiss a terminally ill man who worked at the zoo.

Mario, a 54-year-old man with mental disabilities, worked at the Rotterdam Zoo in the Netherlands for 25 years as a cleaner. When he was diagnosed with terminal cancer, his wish was to go back to the zoo to say goodbye to all of the animals. He was brought to the zoo on a stretcher last week by the Dutch Ambulance Wish Foundation, which grants last wishes to people who are immobile because of an illness. While he was there, one of the giraffes reached down to give Mario a farewell kiss, and this photo capturing the bittersweet moment has gone viral. The group said on its Facebook page that it’s shocked by all of the attention the image has drawn. — Read it at ABC News

Officials say an increase in funding is helping Animal Care & Control of New York City find forever homes for more cats and dogs, and reducing the number of animals who are euthanized. They credit a $5 million boost in funding with an 11 percent increase in cats and dogs who found homes last year, and a 30 percent reduction in those who were euthanized in the same time frame. "I think you see change happening almost immediately," said AC&C executive director Risa Weinstock. The money has been used to add staff and additional services, such as improvements to facilities that reduce animal stress. — Read it at Paw Nation

In October, an unexpected blizzard dumped four feet of snow and resulted in the deaths of tens of thousands of cattle who were left in fields in western South Dakota. More than 40,000 cats, sheep and horses caught in the bad weather died of congestive heart failure brought on by stress. Another 1,000 animals died in North Dakota. Now, calving season has started, and the ranchers in the area are hoping to begin to replenish their herds with thousands of newborns between now and May. — Read it from AP via Yahoo 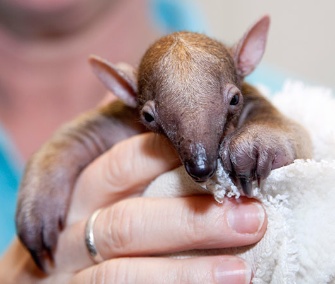 Denver Zoo
The staff at the Denver Zoo stepped in to help save the life of a newborn Southern tamandua.

Staff Stands in for Anteater’s Mom

Keepers at the Denver Zoo have been working around the clock to supplement the care of a first time Southern tamandua mom. The staff noticed within 24 hours of the baby’s birth on March 7 that Rio wasn’t being attentive to her baby, who keepers believe is a girl. Rio wasn’t allowing little Cayenne to nurse, so the staff started bottle feeding her and keeping her warm with an incubator. At the same time, they continued to give Rio time to bond with and nurse her baby. She’s slowly coming around to learning her role as mom. “We knew from our conversations with experts at other zoos that it can take a new tamandua mother a while to develop maternal instincts, and first births of this species typically have low success rates,” says Kristin Smith, the zoo’s manager of educational programs. “We were determined, though, to make sure this baby would survive while Rio figured out how to be a good mom.” Southern tamanduas are a species of anteater found in South America. — Read it from Zooborns

Three elephants from the Shrine Circus were spooked by loud noises and ran off into a parking lot in Missouri on Sunday. Circus workers took off after them, calling for food to distract the animals. Police said multiple cars were damaged during the 45 minutes that the animals were on the loose. The circus said its handlers were finally able to get control of the elephants and they were “resting comfortably in their compound.” — Watch it at USA Today