May 1, 2013: We've scoured the Web to find the best and most compelling animal stories, videos and photos. And it's all right here. 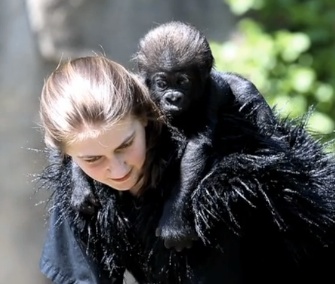 USA Today
Gladys the baby gorilla gets a ride from one of her surrogate moms.

When we last told you about Gladys, who was born at a Texas zoo on Jan. 29, she had just been transferred to the Cincinnati Zoo because her mom had rejected her. After two months of getting adjusted, the little girl has started walking and taking her bottle on her own. On Tuesday, her dedicated keepers — dressed in gorilla suits — took her into her yard, where she met the public for the first time. Ashley Chance and Ashley O’Connell have been acting as Gladys’ surrogate moms as they prepare to introduce her to two adult female gorillas, who they hope will accept the baby and raise her. — Read it at Today and watch video at USA Today

A new study by the U.S. Geological Survey finds that green sea turtles are making themselves at home at Dry Tortugas National Park, which is 70 miles west of Key West, Fla. The endangered turtles are nesting on the beaches of the Dry Tortugas islands and grazing in the sea grass beds and reefs in their surrounding waters. “We were thrilled to find that these turtles used some areas already under ‘protected’ status,” said lead author Kristen Hart, an ecologist with the USGS. The researchers mapped the sea floor using an underwater camera system and tracked the turtles using GPS devices. The study was published in the journal Biological Conservation. — Read it at Discovery News

Move over, Portia de Rossi and Jason Bateman. A poised ostrich may have been the biggest star at Monday’s premiere for the new season of Arrested Development. The big bird appears in the first episode of the season, which starts on May 26 on Netflix. And we’re expecting more ostrich news to come out of the show. "I would describe this season of Arrested as being bird-heavy," said creator Mitchell Hurwitz in an October interview with Entertainment Weekly. — See photo at People Pets 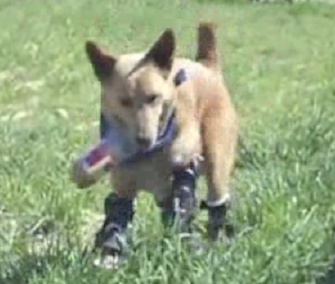 KTLA via Medical Daily
Naki’o can run again thanks to his four prosthetic paws.

Naki'o, a dog who lost his paws to frostbite, has been given a second chance at life. The mixed breed puppy was found over the winter, abandoned in a foreclosed home in Nebraska. At 8 weeks old, he was adopted by Christie Pace, a veterinary assistant in Colorado. “I knew I could help him out,” said Pace. She held a fundraiser and got him fitted for prosthetics with the Denver-based Ortho Pets. Now, Naki'o, who’s believed to be the first dog to have prosthetics on all four legs, is off and running — and his owner has been inspired to start a rescue group for pets with disabilities, according to California’s KTLA. — Read it at Medical Daily

Just like any siblings, Tikal and Maderas don’t always get along. When the jaguars celebrated their first birthday at the San Diego Zoo on Friday, Tikal decided he didn’t want any part of sharing his “cake” with his sister. According to the zoo’s Facebook page, “He even tried to guard it from mom, but she wasn't having it.” — See photo on Facebook