March 12, 2012: We've scoured the Web to find the best and most compelling animal stories, videos and photos. And it's all right here. 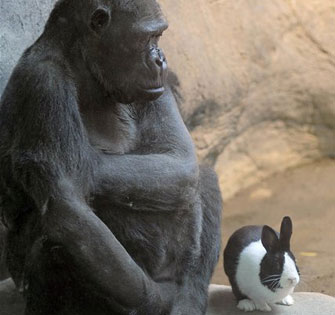 AP
Samantha the gorilla with her new bunny buddy, Panda.

Gorilla Has a Rabbit Roommate

Zookeepers at Pennsylvania’s Erie Zoo have found a new companion for their aging west lowland gorilla — a bunny named Panda. (Still with us?) Samantha, the 47-year-old ape, had been lonely after her gorilla pal, Rudy, died in 2005. Due to her age, zookeepers didn’t think that Samantha would be up for meeting another gorilla, but Panda turned out to be the perfect roommate. "Right off the bat, they hit it off," said the zoo’s director. — Read it at UPI

A year ago, disaster struck Japan when a 9.0-magnitude earthquake hit, resulting in a tsunami and a meltdown of several nuclear reactors at Fukushima. In the 12.5-mile radiation zone, animal support teams have helped reunite numerous pets with their owners, but they're still working to help many other pets left behind when their owners fled. “There are new animal issues evolving,” World Vets founder and CEO Cathy King told Discovery News. “Overpopulation of dogs and especially cats has become an issue with the number of street animals increasing.” — See a slideshow at Discovery News

When Jim Berger was 12, he wrote to architect Frank Lloyd Wright with a request: He wanted plans for a doghouse for his black Labrador that would be easy to build and would match his house. Berger offered to pay for the plans with the money he made as a paperboy. Wright did eventually send Berger plans for what’s believed to be the only doghouse he ever designed — at no charge. Berger recently rebuilt the doghouse, which is featured in a documentary on Wright. — Read it and see a photo at the Detroit Free Press

Penguins on a Plane

How’s this for in-flight entertainment? On a Delta flight from San Antonio to Atlanta, penguins Pete and Penny marched up the aisle, greeting people. The duo was bound for New York for the premiere of Discovery’s documentary, Frozen Planet. — Read it and see the video at the Huffington Post

Lost Hiker Found With Her Cat in a New Mexico Forest

A 41-year-old woman and her cat were located in a New Mexico national forest; they'd been missing for over three weeks. Margaret “Lisa” Page was found in a sleeping bag with her calico, Maya, by her side. A rescue worker offered to care for Maya until Page was released from the hospital. — Read it at People Pets

Facebook Network in Alabama Jumps Into Action for Missing Dog

When an Alabama family’s Chorkie, Lola, went missing during a February storm, her owner turned to Facebook. “I was shocked how quickly my post became viral at the local level around here,” Sherill Metz told Today.com. The three-pound pup was reunited with her family a week later. — Read it at Today