March 25, 2014: We've scoured the Web to find the best and most compelling animal stories, videos and photos. And it's all right here. 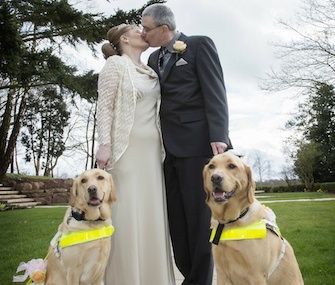 Guide Dogs for the Blind Association
Guide dogs Venice and Rodd were ring bearers in the wedding of their owners, Claire Johnson and Mark Gaffey.

Last year, we told you the sweet story of how guide dogs Venice and Rodd fell in love while they were training at a school in England, and led their owners to become inseparable, too. On Saturday, with their dogs at their sides, Claire Johnson and Mark Gaffey got married. "Our dogs were the class love story,” Johnson said. “Everyone used to joke about how Mark's dog Rodd and my dog Venice were meant to be together." Johnson and Gaffey got to know each other during training with the Guide Dogs for the Blind Association and discovered that they lived only 1.5 miles from each other, so they continued to get their Labrador Retrievers together, and ended up falling in love themselves. "I have no doubt that our guide dogs brought us together and helped me find my true love,” Johnson said. “Much like our two guide dogs, we really are best friends and soul mates." — Read it at the U.K.’s Mirror

U.S. Coast Guard officials said 168,000 gallons of oil spilled from a barge into Galveston Bay in Texas after a collision with a Liberian-flagged ship on Saturday. The cause of the spill is under investigation by the Coast Guard and the National Transportation Safety Board, but the oil is threatening birds at a nearby wildlife sanctuary. At least three birds have been killed, and other wildlife including dolphins and turtles could be affected, too. — Read it at the Los Angeles Times

Although few animals remain faithful to their partners, researchers from the University of Pennsylvania who observed Azara’s owl monkeys in Argentina over the course of 18 years said they never spotted a philanderer. They’d also seen that the males were unusually involved in the care of their infants. Now, a genetic analysis of 35 offspring born to 17 owl monkey pairs has confirmed that the couples were monogamous during the mating season. This is the first time monogamy has been genetically verified in primates, and the fifth time it’s been verified in mammals. The findings were published in the Proceedings of the Royal Society B. — Read it at The New York Times 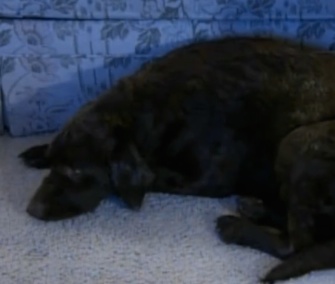 USA Today
Buddy was saved after being trapped in the Washington mudslide, but his owner is still missing.

The McPherson family lost a lot in the devastating mudslide in Oso, Wash., on Saturday. Helen and Irene McPherson are still missing their sister, Linda, and their family home and farm of five generations was washed away. But Monday brought a glimmer of hope when Irene’s grandson, Quinton, heard Linda’s chocolate Lab, Buddy, whining in the rubble. He was freed and cleaned up, and is recovering from the cuts and bruises he suffered. The family thinks the shaken dog was carried about 100 feet in the mud. “We needed a win,” said one grateful family member. At least 14 people have been confirmed dead in the mudslide, and 176 are still missing. — Watch it at USA Today

On Sunday morning, the Kelley family could hear their dog, Dixie, barking in the backyard of their Massachusetts home. Grant Kelley, 7, was the first one to look out and see that Dixie was barking at a white-tailed deer who was stuck in their white picket fence. His dad, Brian, had just come home from working an overnight shift, and went out to help the animal. "I started to gently free the bottom legs first, release the pickets and then was able to move the deer gently off the top of the fence," he said. Once it was free, the deer darted off into the woods. "We are all animal lovers in this family, so we were thrilled to see it ended well," said Brian’s wife, Kate, who caught the rescue on video. "We were very fortunate and so we named it ‘Lucky.’" — Watch it at NBC Washington