Jan. 12, 2017: We've scoured the Web to find the best and most compelling animal stories, videos and photos. And it's all right here. 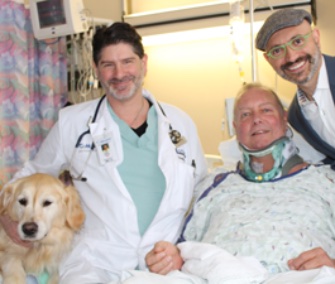 McLaren Northern Michigan Hospital
Kelsey is credited with saving her owner's life after he broke his neck in a fall on New Year's Eve.

At 10:30 p.m. on New Year’s Eve, Bob put on his slippers and ran out of his Michigan home to grab another log for the fire. That’s when he slipped and fell in the snow, and broke his neck. He tried to scream for help, and his Golden Retriever, Kelsey, came running. “My nearest neighbor is about a quarter mile away and it was 10:30 p.m., but my Kelsey came,” Bob said in a statement released by McLaren Northern Michigan Hospital on Tuesday. “By morning my voice was gone and I couldn’t yell for help, but Kelsey didn’t stop barking.” Bob lay paralyzed in the snow for 20 hours in temperatures that dropped to 24 degrees. Kelsey never stopped barking for help and never left Bob’s side, laying on top of him to keep him warm and licking his face to keep him alert. Finally, when Bob fell unconscious, Kelsey let out a “screeching howl,” and a neighbor heard her and got help for Bob. Amazingly, Bob is now on the road to recovery. “I was surprised to find out that I didn’t have any frost bite. I am sure it was because of Kelsey’s determination to keep me warm and safe.” — Read it at CBS News

Jon Stewart and Wife Get Key Approval for Farm Sanctuary

The former Daily Show host and his wife, Tracey, an animal activist and best-selling author, got approval Tuesday night from the Colts Neck, New Jersey, planning board to move forward with their farm animal sanctuary and education center. The couple reportedly paid $4 million for the historic 45-acre Hockhockson Farm last year. Tracey Stewart plans to host tours and educational programs for schools and the public at the farm starting in 2018. — Read it at NJ.com

Neighbors came to the rescue of a missing 1,500-pound Clydesdale mare who was found “submerged under bone-chilling water” after falling into an icy creek in Alberta, Canada. Cody Scott, 20, captured the rescue operation on his GoPro camera. It took neighbors two to three hours to get the horse back up on her feet in weather that was 13 degrees below zero. “I could tell she was incredibly weak due to her breathing, and, at one point, it almost seemed like she was giving up,” Scott said. The horse’s owners took her to a nearby veterinary clinic. She was “was pretty cold and certainly very tired,” but is believed to be OK, said a local fire chief. — Watch it at ABC News 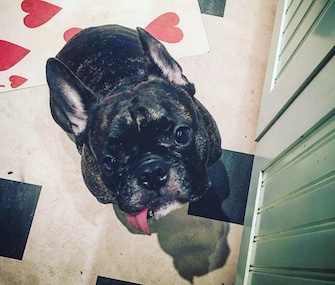 Twitter / MsJoelyFisher
Actress Joely Fisher got the chance to hang out with her late half-sister's beloved dog Gary this week.

Carrie Fisher’s French Bulldog, Gary, was a service dog to her, and now he’s helping her family cope with their grief. The late actresses half-sister, Joely Fisher, Tweeted a photo of Gary for all of his fans on Tuesday. “Auntie Joely got to hang w/ @realgaryfisher today … he is happy and well cared for,” Joely wrote with the photo. “He sends big love 2 all his fans.” Gary was always at Carrie Fisher’s side, and reportedly remained by her side while she was hospitalized following a heart attack. She died on Dec. 27, and Gary is now living with her daughter, Billie Lourd. — Read it at People Pets

A snowstorm dumped more than a foot of snow on Portland, Oregon, Wednesday, shutting down a 50-mile stretch of Interstate 84 and leaving thousands without power. But some residents were thrilled with the snowfall: those who live at the Oregon Zoo. In a video that the zoo posted to YouTube, Nora the 1-year-old polar bear looked delighted as she tumbled around in the fluffy white stuff during her first snow day of the year. The sea otters and seals loved exploring, and Samudra the Asian elephant plowed through it like a pro. — Watch it at YouTube