Sept. 22, 2015: We've scoured the Web to find the best and most compelling animal stories, videos and photos. And it's all right here. 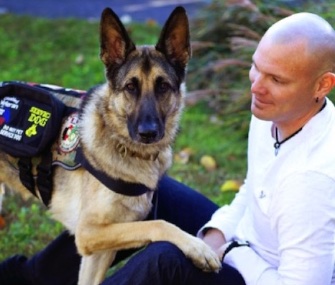 American Humane Association
Axel was stopped from boarding a flight home the day after he was honored for his work as a service dog to Marine veteran Jason Haag.


On Saturday, Axel the German Shepherd was honored by the American Humane Association as the Service Dog of the Year for his work in helping Captain Jason Haag with the post-traumatic stress disorder he suffered after serving in both Iraq and Afghanistan. But the day after Axel received his award at a gala in Los Angeles, he and the Marine veteran were stopped from boarding an American Airlines flight to return home to Virginia, demanding “proof” that the dog was a service dog. The airline requires at least one of four items to prove a dog is a service dog, and Haag had provided three of those things. “While airlines certainly have the right to maintain appropriate protocols, these should not and cannot prevent life-enhancing and life-saving service animals from accompanying the people who so greatly need them. In this case, the airline did not even follow its own guidelines,” said Dr. Robin Ganzert, president and CEO of American Humane, in a statement. American Airlines has now apologized to Haag for the situation. Haag and Axel were finally able to return to Virginia Monday. — Read it at First Coast News


Researchers Determine What the Giraffe Says

After long believing that giraffes don’t vocalize despite having a voice box, scientists from the University of Vienna in Austria say the animals do produce low frequency sounds, mainly at night. In a "time consuming, tedious, and very challenging" process, the researchers recorded giraffes at three European zoos over the course of eight years. They found the animals make "structurally interesting humming vocalizations," usually at night, at a frequency of around 92 hertz. Although they couldn’t prove the noise was made for communication, they found hints that it might serve as a way to reestablish contact with their herd mates. The study was published in the journal BMC Research Notes. — Read it at USA Today

Veterinarians at the San Diego Zoo Safari Park are struggling to understand why 41-year-old Nola has a recurring abscess in her hip. Nola is one of only four northern white rhinos believed to be left in the world, so helping her recover is critical. Earlier this month, the abscess was drained, samples were taken for testing and she was put on antibiotics. Last week, the procedure was repeated. Still, her caretakers haven’t gotten to the root of the problem. "At this point, we simply don't know," said Jim Oosterhuis, principal veterinarian at the park. For now, they’re trying to keep Nola comfortable in her home. Luckily, she has energy and is eating and drinking regularly while the animal care team continues to monitor her closely. — Read it at the Los Angeles Times 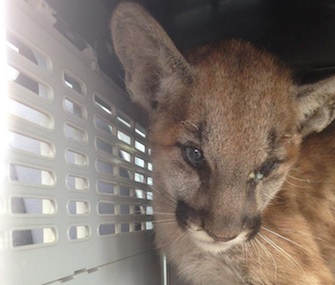 California Department of Fish and Wildlife
Fire Claw, a baby mountain lion, is recovering after being found burned in the Butte Fires area in California.

A mountain lion cub who was badly burned in the Butte Fires in California is “stabilizing well and on a path to recovery,” the state’s Department of Fish and Wildlife posted on Facebook Monday. The 4-month-old baby was emaciated and suffering from burns to his face and paws when he was found by animal rescue volunteer Bobbie Carne last week. Carne was working with a group that was evacuating domestic animals when she came across the kitten. He was rushed to a nearby animal hospital, where he was named Fire Claw. Because of his age and health, officials have decided he can’t be released back into the wild. Fire Claw is expected to be moved to a wildlife education facility once he’s in better condition. Fire Claw’s rescue was in unusual circumstances, but officials want to remind people not to approach wild animals, even if they appear to be injured. It’s best to call for professional help. — Read it at People Pets

Actress and reality TV star Tori Spelling is searching frantically for her missing 6-pound Terrier mix, Mitzi. The dog disappeared from Calabasas, California, Sept. 15. Spelling said there is added urgency to find Mitzi because she needs medication. The longhaired pooch is wearing a collar but it has outdated information. She does have a microchip. Spelling posted Mitzi’s picture on Instagram with a plea for her followers to share it in the hopes of finding her dog. She said in the post that Mitzi barks but is friendly and doesn’t bite. Spelling also said she would offer a reward to whoever finds the pup. — Read it at CBS News