Oct. 31, 2012: We've scoured the Web to find the best and most compelling animal stories, videos and photos. And it's all right here. 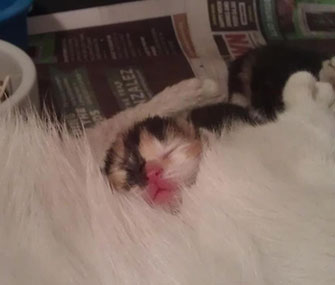 Sean Casey Animal Rescue / Facebook
One of the rescued kittens curls up safe and sound with mom.

Amid the dramatic photos of Hurricane Sandy pet rescues comes the heartwarming story of a Brooklyn man who took a risk as the storm was rolling in to save a mother cat and her tiny kittens. Spencer Service looked out his apartment window and saw the cat family curled up in the alley below. As the wind picked up, he headed downstairs to try to shelter them with a cardboard box, but quickly realized that wouldn’t be enough. So, Service managed to get the mother and babies into a carrier, and made a 2-mile hike through the wind and rain to the Sean Casey Animal Rescue. Once they arrived, volunteers dried the soaked kittens and gave them a warm, dry place to snuggle with mom. But Service isn’t done with his rescue just yet. "I'm planning on taking one of them," he told his local Patch site. "I can’t not." — Read it at Prospect Heights, N.Y., Patch and see our photos of pets weathering the storm

People aren't the only ones who lost their homes during the storm— our feathered friends are also suffering. Bird species that require low habitats like beaches, marshes and dunes have likely been displaced,Bryan Watts, director of the Center for Conservation Biology in Virginia, told National Geographic. “Some of the groups we'd expect to be most affected are ones that depend on coastal habitats, such as piping plovers, Wilson's plovers, least terns, etc.,” Watts said. “It looks to me like the main lasting effect of this is going to be a coastal reshaping.”— Read it at National Geographic News

Four years after a massive earthquake devastated the Wolong Nature Reserve in China’s Sichuan province, 18 giant pandas were finally able to return home to the reserve this week. The bears, who’d been removed from the center after the May 2008 quake, happily ate bamboo and played together in their new environment. Up to 59 pandas can make their home at the new reserve. — Watch video at the U.K.’s Guardian 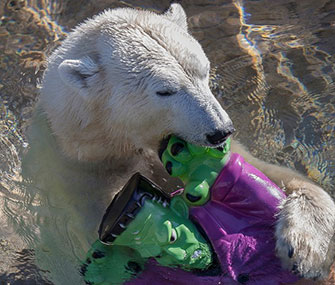 While you get ready to put that hot-dog costume on your pet, animals big and small at zoos across the country are enjoying Halloween fun of their own. Tatqiq, an 11-year-old female polar bear, had a grand time playing with this Frankenstein lawn ornament at the San Diego Zoo’s monster bash on Tuesday. She tossed and wrestled with the toy until she wore herself out and was ready for a nap, the zoo said. — Read it at the San Diego Zoo

Researchers at Vienna, Austria’s University of Veterinary Medicine say the new breed of Selkirk Rex is genetically distinct from previously known curly-haired cat breeds. The results of their genetic analysis, which were published in the Journal of Heredity, confirm that the Selkirk Rex breed arose from a spontaneous mutation in a single cat about 25 years ago.— Read it at Science Daily

Does Justin Bieber Have a New Love?

Watch out, Selena Gomez!Justin has a new companion on his North American tour: a hamster. "This is PAC the hamster my new believe tour pet I will bring him to every meet n greet," he Tweeted with a photo of the animal. He’s been Tweeting photos of his new pal since introducing him to his fans earlier this month.— See photos at People Pets