Nov. 14, 2013: We've scoured the Web to find the best and most compelling animal stories, videos and photos. And it's all right here. 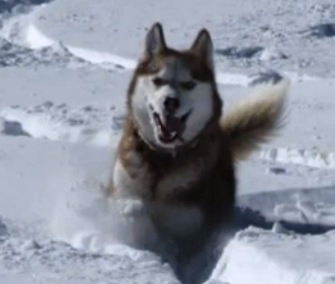 Fox 31 Denver
Juneau is being credited with saving the life of her owner after a traumatic ski accident that left him paralyzed.

When Leonard Somers suffered a traumatic ski accident in the backcountry of Colorado a week ago, it was his loyal Alaskan Husky, Juneau, who raced to get help. Somers had fallen into a ravine, where he hit his back and neck on a frozen tree trunk, leaving him with severe spinal injuries. He was paralyzed from the waist down. Juneau ran to the bottom of the trail, where she barked to get the attention of other skiers, and led them back to where Somers was. “She knew that I needed help,” Somers says. “She helped me dig out of the snow and proceeded to lay on my legs and some of my body to keep me warm until help came.” Somers was taken to the hospital by helicopter and underwent surgery. Five-year-old Juneau has been allowed to visit her owner during his recovery there. “I love her so much for her help. If you ever see her on the street, just give her a big hug and a kiss.” — Watch it at Fox 31 Denver

A team of German scientists used aerospace engineering to unlock the secrets to the unique flight patterns of the albatross. They attached GPS tracking devices to 20 wild birds and were able to determine that they yo-yo up and down in the sky, using the momentum from their downward glides to climb back up against the wind. That keeps the massive birds in the air without requiring too much energy, and allows them to go as far as 10,000 miles in one flight. The study was published in the Journal of Experimental Biology. — Read it at National Geographic

Georgia-based dog food company Bailey’s Choice has expanded a recall of its Teriyaki Chicken Treats beyond its home state to include treats distributed in North Carolina, South Carolina, Virginia, Delaware and Tennessee. The company first issued the recall over salmonella concerns last week. A Bailey’s Choice spokesman says the company has repaired a digital thermostat that caused a dehydrator used to maintain proper temperatures to malfunction. — Read it from the AP via South Carolina’s Fort Mill Times 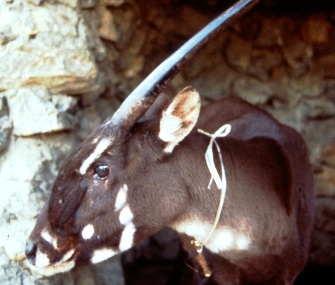 WWF
An elusive saola like this one was sighted by a remote camera in Vietnam.

A critically endangered and elusive mammal known as the “Asian Unicorn” has been photographed in Vietnam for the first time in 15 years. The twin-horned animal was first discovered in 1992, when it became the first large mammal new to science in more than 50 years. The single saola was documented in September by a camera trap set up in the Central Annamite Mountains by the World Wildlife Fund (WWF). "When our team first looked at the photos we couldn't believe our eyes," said Van Ngoc Thinh of the WWF in Vietnam, in a statement. "Saola are the holy grail for Southeast Asian conservationists so there was a lot of excitement. This is a breath-taking discovery and renews hope for the recovery of the species." Experts believe there are no more than a few hundred saola left in the wild. — Read it at Live Science

Six-month-old Mork runs, pounces and plays just like any other energetic kitten. But the Siamese mix does it with only his two front legs. The kitten was born with severely deformed back legs. Before he was taken in by the Best Friends Adoption Center in Los Angeles, he spent time with another rescue group, whose veterinarians removed one of his back legs, which wasn’t of use to him. They left the other, with the hope that he would start using it on his own. The staff at Best Friends has tried to come up with ways to get him to use that leg, but the little guy with two big front paws seems content to use it as a cane to steady himself when he needs it. The group is searching for the perfect home for the adorable blue-eyed Mork. But until then, he’s happy to play with his roommates, Buzz and Louie. — Read it from Best Friends Animal Society